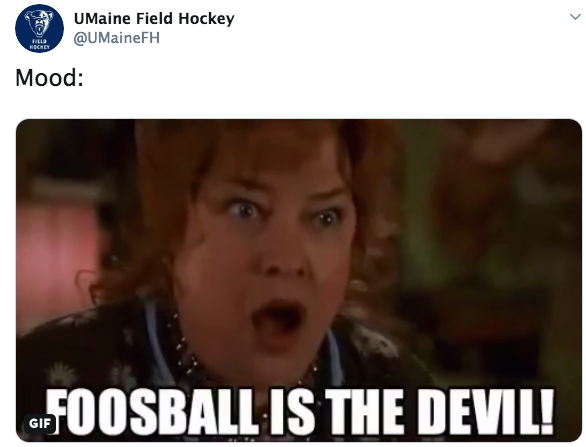 A lack of foresight led to a bit of a scheduling blunder at Kent State on Saturday. A field hockey game between Temple and Maine on Kent State’s campus was called a no-contest after the scoreless affair started to run into a clock management issue thanks to two overtimes.

The issue? Kent State had a football game to play.

Due to a field issue, today’s game against Maine was unable to be completed.

The scoreless tie will be entered as a scrimmage.

Today's game at @KentState has been declared a "no contest" after Kent State administration came onto the field prior to the second overtime half and called off the game to allow the noontime Kent football game to begin on time.

If it seems odd that a field hockey game would just be wiped off the books entirely to make room for a Kent State football game, well, that’s because it is. Kent State may not be any kind of football power like Alabama or Ohio State, but it’s a good reminder that even here football is king.

The weirdest part? The field hockey game was being played on an entirely different field than the football game. Per Yahoo!:

Incredibly enough, Maine and Temple field hockey weren’t even playing on the same field as Kent State football. Murphy-Mellis Field is simply adjacent to Kent State’s Dix Stadium, but that was apparently too much of a hindrance for the football team.

Even stranger, the actual reason Kent State wanted the field hockey field was so that they could shoot fireworks on it. That’s it.

“We regret today’s game had to be stopped during overtime play per field guidelines as previously discussed,” a statement from Kent State’s field hockey Twitter account said. “We recognize the hard work and dedication of all student-athletes. The safety of our community, including student-athletes and visitors, is always our first consideration.”

As it stood, the Golden Flashes barely avoided losing to Kennesaw State, an FCS program in its fourth season of playing college football. Ironically, Kent State needed overtime to win the game.

Maine’s field hockey team will get another chance to play on Kent State’s field, at least, when they face Kent State on Sunday.

The game will be classified as an exhibition, affecting neither team's statistics or overall record. If more details reach us, we'll be sure to share them.

The Black Bears will be in action tomorrow at 11:00 am against… Kent State. #BlackBearNation | #AEFH

Hopefully, it doesn’t go to overtime.