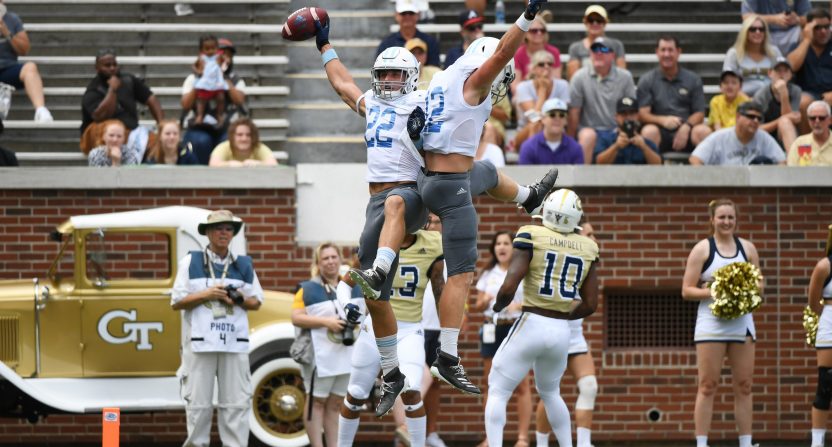 ACC football may have the No. 1 Clemson Tigers but the early start to Week 3 offered another glaring reminder that this conference ain’t all that great. From Boston College getting trounced at home by Kansas to Georgia Tech stumbling at home to The Citadel and Virginia Tech barely managing to escape an upset at home against Furman, it’s been a rough few days for the conference. Heck, the best win of the week’s early games may be Wake Forest’s nonconference win… against North Carolina.

Even when the ACC wins, it loses.

The rough weekend for the ACC started Friday night with three teams in action in two games. Yes, this was the weekend we finally got that highly-anticipated “nonconference” showdown between Wake Forest and North Carolina. On the final play of the game, North Carolina’s Michael Carter appeared to step out of bounds with one second remaining on the clock. Because the play resulted in a first down, the clock should have stopped even if forward progress ruled the play dead before Carter stepped out of bounds. No official review of the time was initiated, leading the ACC to issue a statement regarding the failure of their officiating crew on Saturday.

Also on Friday night, Boston College hosted perennial Big 12 doormat Kansas and was favored by 20 points. They lost by 24 in what can honestly be described as the most brutal loss of the Steve Addazio era. This was just a preview of things to come on Saturday as the ACC lost games against teams from the Big Ten (Pitt losing to Penn State), Big 12 (NC State losing by 17 at West Virginia), and the Southeastern Conference…..er, I mean the Southern Conference.

THE CITADEL! Georgia Tech falls to a non FBS opponent for the first time since 1983.

Georgia Tech's 27-24 loss to The Citadel is just their 2nd loss to a non-FBS opponent since the FBS/FCS split in 1978.

The Yellow Jackets only previous defeat came vs Furman on September 17, 1983.

Virginia Tech also had to dig themselves out of a hole at home against Furman. These certainly aren’t your father’s Hokies. Heck, they’re not even your slightly older cousin’s Hokies these days.

Losses and close calls against inferior teams will happen and they never look all that great. But the ACC’s stumblings against other power conferences ultimately carry more weight, and the conference has come up small in that department (except for you Clemson, you’re just fine and keep doing what you’re doing).

Pitt, who played in the ACC Championship Game last season, lost on the road against Penn State, but at least they kept things respectable in a 17-10 setback. Still, Pat Narduzzi’s explanation for kicking a field goal from the one-yard line with under five minutes left in a seven-point game didn’t help matters.

Pitt was 3-for-3 on fourth down against Penn State. They were on the one-yard line. Just saying. https://t.co/k1euyrD40S

Maybe Narduzzi could have been justified in his logic if his kicker made the kick. He didn’t.

NC State also laid a dud on the road against West Virginia, which dropped the ACC to 0-2 against the Big 12 this week. After getting to halftime tied at 21-21, the Wolfpack was unable to keep pace with the Mountaineers, who outscored them 23-6 in the second half.

The ACC has already had some frustrating results this season as well (again, Clemson is excluded from this). Florida State blew a big lead at home against Boise State and followed that up by breathing a huge sigh of relief against Louisiana-Monroe. Syracuse, whom many thought might provide an actual challenge to Clemson, got run over by a Maryland team that just got shut down by Temple.

What does any of this mean for Clemson? While the Tigers may be the best team in the country, a struggling conference hurts the strength-of-schedule aspect of the College Football Playoff discussion. To some, it may be a significant data point against the Tigers. However, that probably only comes into play for the defending national champions if they lose.

As long as Clemson wins all of their games and wins the ACC outright, they will have no issue making the four-team playoff at the end of the year. If the Tigers get tripped up somewhere, however, the integrity of the rest of the conference can absolutely be held against them, especially if it’s between them and another one-loss team from the SEC or Big Ten. You can expect that Dabo & Co. intend to make sure that the conversation doesn’t need to take place.