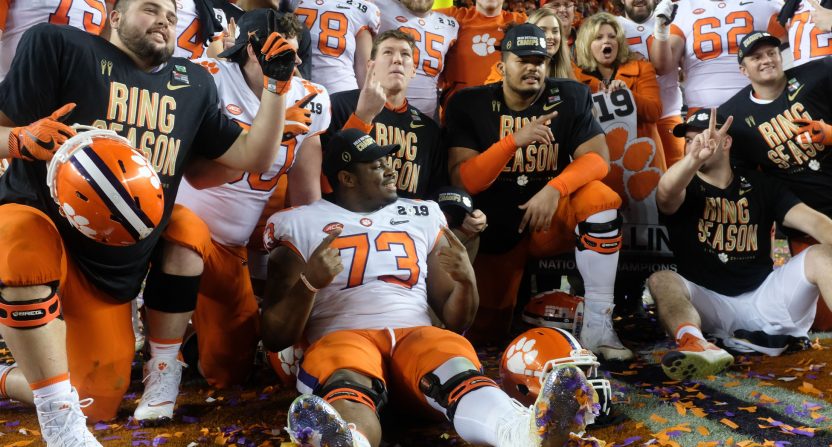 The ACC went a solid 6-5 in bowl games this year, and capped it off with the big one. Clemson won its second National Championship Game in three years, blowing out Alabama in the process. Clemson’s two blowout wins over Top 3 teams were not the only feathers in the ACC’s cap. There were some bad losses, to be sure. Only ending the season with two ranked teams is not a good look for the conference. But the ACC won the big one, got some other good wins, and should have good momentum heading into 2019.

Beating up on the AAC

Middling ACC teams played three bowl games against the top tier of the AAC. The American Athletic Conference has been pushing its “Power 6” initiative for a few years now, but the ACC put a serious dent in that this bowl season. Wake Forest came back one of the most entertaining bowl games of the year, beating AAC runner-up Memphis in the Birmingham Bowl on a last-minute touchdown. Duke laid a second-half beating on Temple, outscoring the Owls 35-0 in the final two quarters. Virginia Tech couldn’t quite pull off the upset of the AAC’s only other ranked team (aside from UCF). Still, barely beating a 6-6 ACC team who needed to schedule Marshall during conference championship weekend just to become bowl-eligible isn’t a good look for the AAC. Virginia Tech didn’t win, but it was definitely the best losing showing by any ACC team.

Coaches leaving with a whimper against the Big Ten, and other embarrassments

As it turns out, two ACC coaches retired after bowl season this year. We all knew about Paul Johnson’s plans, but his team couldn’t turn in a good performance and lost 34-10 to Minnesota. Of course, no one saw Mark Richt’s career ending. Miami has been in a downward spiral since losing to Pitt last year. Wisconsin continued that in the Orange Bowl, and hammered a nail in the coffin at this year’s Pinstripe Bowl. Seeing Georgia’s success so quickly after he left can’t have been easy for Richt either. Richt decided to call it a career after his 35-3 loss in Yankee Stadium.

Pitt lost to Stanford in embarrassing fashion. Not because the Panthers played poorly–the defense was amazing. But Pitt couldn’t score and looked totally inept on offense, which allowed Stanford to come up with a huge comeback win. And, lastly, N.C. State was run out of the stadium by Texas A&M. The Wolfpack fought tough for a half, but they were just overwhelmed by the Aggies.

Also, this isn’t the ACC’s or Boston College’s fault, but the canceled First Responder bowl is an embarrassment for all of college football.

Syracuse’s win over West Virginia might feel a little hollow because Will Grier (along with a few others) sat out the bowl game. It shouldn’t. West Virginia is still a good team and was still favored to win. The Orange picked things up in Year 3 of Dino Babers’ tenure, and should be contenders in the ACC moving forward. A lot of talent leaves this offseason–including star quarterback Eric Dungey–but Syracuse as a program is much better than it’s been for a decade.

Also, Virginia beat up on South Carolina to quiet the SEC a little and restore some faith in the ACC. Bronco Mendenhall is doing great things in Charlottesville. Expect this program to only get better as the years go on. Pretty soon, 28-0 wins over teams like South Carolina won’t be too surprising.

The Tigers beat up on Notre Dame in a CFP semifinal in the Cotton Bowl. That could have been relatively meaningless, though. After all, the Irish have been much maligned in big games for a few decades now. Maybe Notre Dame was just overrated overall?

Clemson put that possibility to bed with a blowout win over Alabama. Don’t be fooled too much–that game was far, far closer than the final score made it out to be. Alabama actually played better overall (I’m serious), but Clemson dominated on the important plays. Third downs, fourth downs, turnovers–those all went Clemson’s way, by a huge margin. People won’t remember that, though. What people will remember when judging ACC teams next year is the final score. That 44-16 beatdown will do wonders for the entire ACC, possibly for years to come.