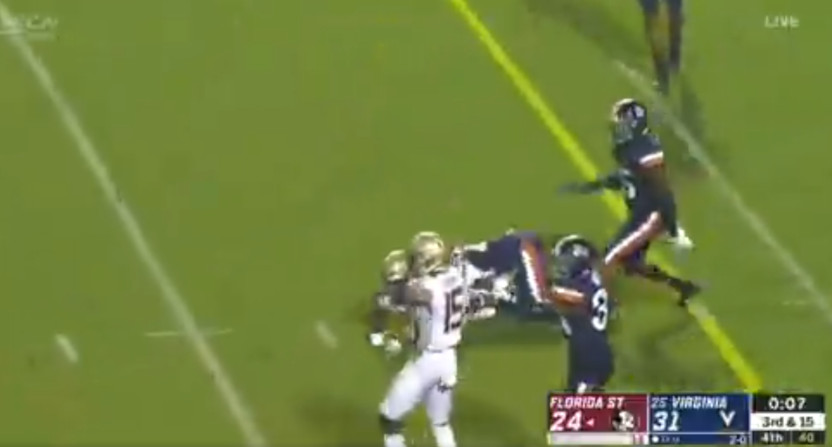 One of the best songs put out by the classic rock band Chicago was “Does Anybody Really Know What Time It Is?” On Saturday, for the second time in as many days, it was pretty clear ACC officials may not know what time it is at the end of a football game.

The latest case of this came in the Florida State-Virginia game Saturday night, but even before that, the ACC sent out a statement acknowledging the replay official working the Wake Forest-UNC game Friday should have initiated a replay review to determine when the clock should have stopped. In that one, UNC’s Michael Carter appeared to have stepped out of bounds with one second left in the game as the Tar Heels were driving, but the clock continued to run off the final second. Even if the play had been ruled dead for forward progress, the Tar Heels had picked up a first down on the play and there should have been one second for UNC to try running a last-effort play.

As explained by the ACC, the replay official should have reviewed the play and adjusted the game clock to add one final second for UNC. As per the statement, whatever discipline this entails will be handled in-house by the conference. And then, fast forward to Saturday night in Charlottesville for what will once again likely result in the ACC having to explain the football officials not being able to monitor the clock properly.

With Florida State on the move trying to tie Virginia in the closing seconds, James Blackman completed a pass to Keyshawn Helton for a 16-yard gain to give the Seminoles a first down at the Virginia four-yard line. This time, the clock did stop for Florida State to allow them one more play, but the issue is if the clock stopped fast enough.

A total of three seconds ticked away from the time Helton was down at the end of the play until the clock was  paused to move the chains on the sideline. Florida State had no more timeouts to use and had to run a play with the clock having wasted three potential seconds. That prevented Florida State from being able to spike the football, calm down and compose themselves briefly for one final play. Instead, the Seminoles were left to scramble and hope for the best.

Needless to say, it did not end well for Florida State.

FSU also definitely had time to rush up to the line, and spike the ball with maybe 3 seconds left just as the clock restarted due to the first down. Instead, took shotgun snap just 1 second remaining. https://t.co/6zoUYhZxWA

OK, here’s the clock at the end of FSU-UVA. Should have stopped at seven. Stopped at four. Not sure it would have mattered because FSU couldn’t get lined up to clock it, but baaaaaaaaad couple of days for ACC clock operators and officiating crews. https://t.co/ZkpPQo6A8G

Expect the ACC to issue another statement about this clock management issue. Granted, very few first downs ever actually stop on a dime, but three seconds seems a bit more egregious at the end of a game than it would in the first quarter, and the clock certainly seemed to play a role in Virginia’s eventual 31-24 win here. For Florida State, the season is already becoming tight, and they could have really used a chance to have a decent shot at tying the Cavaliers. Maybe Virginia would still have won the game, but the officials did Florida State absolutely no favors at the end of this game.

It’s been a pretty rough weekend for the ACC. Maybe things will turn around in Week 4.