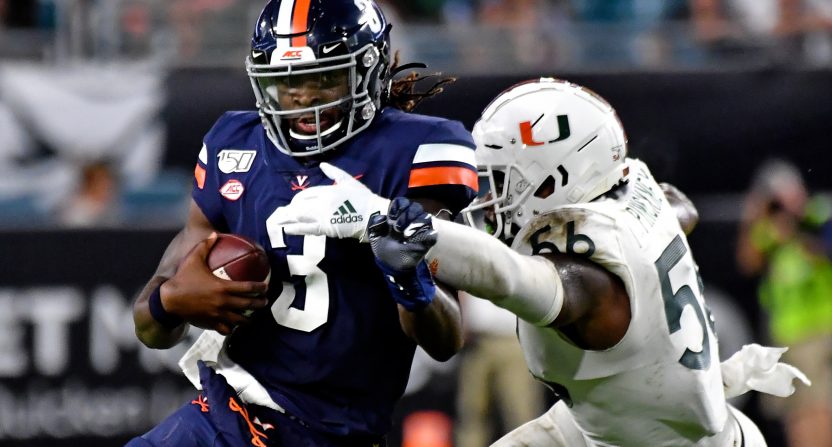 Congratulations are in order for the ACC Coastal Division. On Friday night, with No. 20 Virginia losing on the road against the Miami Hurricanes, the ACC Coastal became the first division in college football in which every team in the division has suffered one conference loss. And they did so before the midpoint of October. Yes, the ACC Coastal Madness is here as the annual wide-open division race is once again up for grabs.

The contrast between the ACC’s Atlantic Division and Coastal Division has been fascinating. While the Atlantic has essentially been either Florida State’s or Clemson’s, with the exception of that weird three-year stretch with Wake Forest and Boston College striking while the iron was hot from 2006-08, the ACC Coastal Division has had six different division champions in each of the past six seasons. Despite their loss Friday night, Virginia could still become the seventh different division champion in as many seasons.

The ACC Coastal is the Bermuda Triangle of college football.

Is it mathematically possible for the Coastal Champion to be 3-5? I need to know.

Virginia is still one game ahead of Miami in the standings, so they don’t have to worry about a head-to-head tiebreaker just yet. Bronco Mendenhall and his Cavaliers also still get some favorable matchups the rest of the season considering the state of the division. Virginia is the only team in the ACC Coastal Divison yet to have the madness go their way for a shot at the ACC title. But as this division has shown, everyone has a shot at winning the Coastal Division. Eventually, that may work out for Virginia.

Virginia is currently tied with North Carolina for first place in the division with 2-1 ACC records. Those two will square off in Chapel Hill on Nov. 2. Pitt and Duke are each 1-1 coming into this weekend, with the Panthers off and the Blue Devils facing rebuilding Georgia Tech on Saturday. The Yellow Jackets are probably the team least likely to figure into how this division plays out, but even they can’t be overlooked as a possible team to throw a wrench into the division race. Virginia Tech has been a puzzle to figure out this season, with their blowout loss at home to Duke and a near disaster against Miami before securing a win.

On paper, Virginia still looks like a pretty good bet to win their first Coastal crown, but Pitt may have played themselves back into the running after rebounding from their loss to Penn State with three consecutive wins. But aside from their big win against UCF, the defending division champion struggled at home against FCS Delaware and pulled out a stunner against Duke. Pitt may have the best possible schedule to emerge in the division. Having already played (and lost to) Virginia in the season opener, the Panthers will get games against Miami and UNC at home. Pitt’s road schedule includes trips to Syracuse, Georgia Tech, and Virginia Tech. The Orange, Yellow Jackets, and Hokies are a combined 1-6 in ACC play this season.

Repeating as ACC Coastal champion is a rarity. It’s been done twice; first by Virginia Tech in 2007 and 2008, and again in 2010 and 2011. If the first half of the season has been any indication, there’s absolutely no way to determine who the best team in the ACC Coastal really is.

You might as well draw names out of a hat and see who gets to play (and lose to?) Clemson in the ACC Championship Game. The odds may be similar either way.