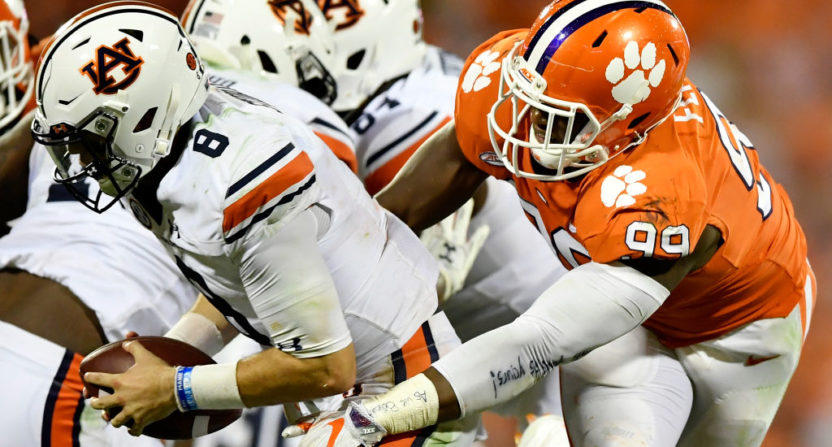 After finishing the 2016 season as the top conference in the land, the ACC had a lot to live up to in 2017. While the league is definitely one of the best in the nation again this year, not everything has unfolded the way that we expected. There have been several surprises – both good and bad – this fall, and several outstanding questions that still remain.

Here’s our ACC midseason review and a look at what’s on tap for the second half of the season.

Even though it lost some key players from last year’s squad, Clemson’s defense is one of the best units in the nation, ranking eighth in total defense, eighth in tackles for a loss, fifth in scoring defense, and third in sacks. Lamar Jackson continues to terrorize opposing defenses, ranking second in the country with 416.7 yards of total offense per game. And, although the order of the teams is probably a little different than we thought it would be, the ACC has some of the best defenses in the league, with half of the schools ranking in the top 30 in yards per game.

The most pleasant surprise is NC State. Sure, I thought that the Wolfpack would upset one of the big three and finish in the top half of the Atlantic Division this fall. However, I did not expect them to beat both Florida State and Louisville, especially after dropping the season opener against South Carolina. If – and it’s a big if – NC State wins out, it would earn a spot in the College Football Playoff. Just be sure to Tweet at Mark Ennis in the event that does happen.

Virginia has already doubled its win total from last season, posting victories over Boise State and Duke along the way. After ranking 93rd in total defense a year ago, the ‘Hoos are 24th in total defense and 20th in yards per play.

Despite losing its top two running backs and a three-year starting quarterback, Georgia Tech is 4-1 and currently sits atop the Coastal division. Quarterback TaQuon Marshall and B-back KirVonte Benson rank first and second in the league in rushing, combining for 999 yards and 13 touchdowns in four games this season.

Many college football writers – myself included – predicted that Florida State would play for the national championship this season. That clearly will not happen, as the ‘Noles are currently 1-3, dropping tight contests against Alabama, NC State, and Miami. Although the team could eventually bounce back (as it did last year), the slow start has to be the biggest disappointment of the 2017 campaign thus far.

North Carolina and Pittsburgh are a very close second. These teams both finished in second place in the Coastal division with a 5-3 mark in conference play last season. This year, neither has a won against a conference foe and both are in danger of not qualifying for a bowl game this season.

The opening weekend of the season was a bit of a downer, with the league dropping close contests to Alabama, Tennessee, and California.

Since I mentioned Marshall and Benson above, I’ll list NC State’s Ryan Finley as the breakout player of the year (so far). Don’t get me wrong: Finley was pretty good last season, throwing for 3,055 yards and a respectable 18/8 TD-to-INT ratio. However, he’s been the most consistent quarterback in the ACC this year, throwing for 295 yards per game, while completing 70.9 percent of his passes. More impressively, he hasn’t thrown an interception through six games. Don’t be surprised if he earns first-team all conference honors at the end of the season.

Virginia Tech’s Josh Jackson also deserves a “shout out” for how well he’s played. While many experts thought that the Hokies might take a step back this year with the departure of Jerod Evans, Jackson has played every bit as well. Through six games, Jackson is averaging 309 yards of total offense per game — just five fewer than Evans averaged last season.

Without question, it’s Kelly Bryant. Yes, other players have better numbers. But what makes Bryant special is that he can do whatever the team needs him to do in order to win. Whether it’s throwing for 316 yards against Louisville, fighting for tough yards against Auburn, or some combination of the two, Bryant always comes up with a big play when the Tigers need it the most.

** Does Clemson have enough firepower to win a shootout like it did in the national championship game last year? We don’t know the answer because the defense has dominated its opponents for most of the season.

** Is Florida State going to rebound like it did last season or will the ‘Noles fail to win seven games for the first time since 1981?

It was tough to pick the five best games to watch because there are some many great matchups remaining. After all, NC State and Miami both square off against Notre Dame, which is one of the most improved teams in the nation. In addition, the conference has annual rivalry games with the SEC, and those matchups always produce some exciting finishes.

With that said, the games listed above are the most important because they will ultimately determine who plays for the ACC Championship. Barring a couple of major upsets – which is certainly a possibility in a conference this deep – two of these five teams will meet in what should be a very exciting league title game.