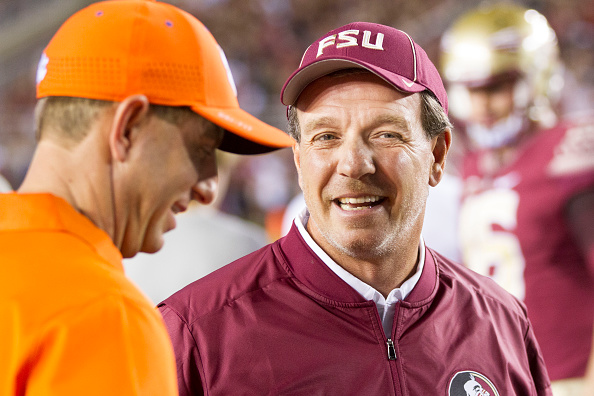 The ACC Kickoff went head-to-head with the tail end of SEC Media Days Thursday. ACC coaches came in with a talking point. Clemson is the reigning national champion. This was the conference’s second national championship in the last four seasons (Florida State won in 2013). Boom. The ACC is the best football conference in the country.

Jimbo Fisher, who won the first of those titles, called the ACC the premier conference in college football.

.@FSU_Football Coach Jimbo Fisher expanded on his thought that the ACC is the premier conference in college football. #ACCKickoff pic.twitter.com/5MRisvRknk

The claim was rich coming from Boston College’s Steve Addazio, whose dudes have compiled a 2-14 record in conference over the past two seasons. Per Addazio, the ACC’s preeminence isn’t even an debate.

"That's not even debatable anymore."

In reality, that premise is quite debatable. National championships are far from the only metric. If they were, well, the SEC has won eight of the last 11. But, some “simple” math suggests the ACC trails college football’s true premier conference, the SEC. It also trails the less heralded Pac-12.

The “Simple Rating System” strives for, you guessed it, simplicity. It accounts for schedule strength and victory margin. Who did you beat and by how much. The better team is the one that beat better opponents by more points. Simple. Little noise to filter out. I’ll use the SRS calculations from Sports Reference. Here are the combined SRS numbers for the Power 5 conferences from 2016.

The ACC is still in third, by a slightly wider margin. That conforms with what we would observe without math. The SEC and Pac-12 had slight down years in 2016 and should bounce back in 2017.

Perception is dictated by the top teams. If Clemson and Florida State are good, the ACC is looking up. Ditto for Ohio State and Michigan in the Big Ten. The collective SRS is giving us a better picture of reality, which is the depth of the conferences. That’s what we want to examine to gauge the conference’s standard of play. Boston College counts too.

Let’s look at the SRS standings for Power 5 conferences from 2016.

Alabama was the clear best team in the SEC. They beat a lot of teams. They did so by wide margins. There was a second-tier – LSU/Auburn/Florida/Tennessee/Texas A&M – that ranged from decent to good. The rest of the conference was mediocre to bad. Georgia too low? Beat Nicholls State by a wider margin next time.

The Crimson Tide carried the SEC to the top ranking. But this, again, was a down year for the SEC. The conference has had years such as 2014, when 11 teams had an SRS north of 8.00.

This is a fair reflection of the Pac-12 pecking order. SRS doesn’t note that USC improved over the season’s course. It does note that USC got obliterated by Alabama, which was a game that counted. This was a down year for the Pac-12 as well. One would expect Oregon and ASU to put in better showings most years. There have been years such as 2013, where Arizona had a 12.60 SRS and the Wildcats were the seventh-best team.

Clemson has a lower score than Alabama. Again, consider what we are measuring, schedule strength and victory margin. Clemson had seven one-score wins. 2016 was a solid year for the ACC. The drag was those bottom six teams, which rank from bad to apocalyptic.

Matching up 1-12, the ACC would have eclipsed the Pac-12. But teams 13-14 count for the conference footprint and they are watering down the schedule. So they count in this rating.

The Big Ten had a top four to match with any conference. The bottom six of the conference, particularly the triumvirate of Rutgers, Illinois, and Purdue were terrible.

Again, this is fair reflection of the Big Ten’s 2016 season. The top four match up with any conference. Countering that was the horrific triumvirate of Rutgers, Illinois, and Purdue at the bottom.

That conforms to what we thought about the Big 12. The Sooners were quite good. Oklahoma State, West Virginia, and Kansas State were decent. The rest of the teams were replacement level at best.

None of this is knocking Clemson. They got Bama and beat them when it counted this time. But that does not mean the ACC is the best conference. It’s tougher to play in the SEC or the Pac -12 where even the bottom half of the league have good coaches and are competitive.

Florida State isn’t ducking anybody. They are playing Alabama and Florida non-conference. But I’d imagine Jimbo would rather play the conference schedule where three of his four road games are Wake Forest, Duke, and Boston College. I’d also presume Steve Addazio wants no part of an SEC West schedule.

1 thought on “The ACC is not college football’s best conference. It trails the SEC and Pac-12”