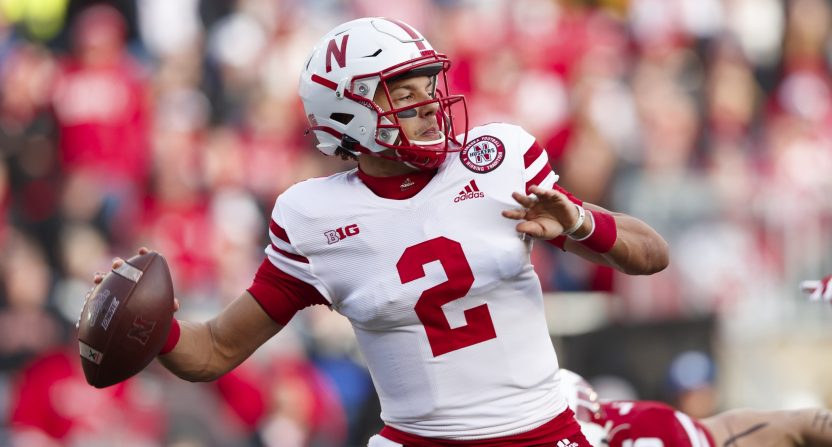 Martinez, who will be considered a graduate transfer, started 38 games for Nebraska and leaves as the school’s all-time leader in total offense (10,792), completions (670), and 250-yard passing games (16). He’s also the single-season record holder for completion percentage (71.5) and games with 300 or more yards of total offense (7).

Martinez started 11 games for the Huskers this season before a shoulder injury forced him to miss their finale. He underwent surgery last week but is expected to be healed for next season, wherever he ends up.

“The University of Nebraska will always be a place I can call home,” Martinez said on Twitter. “It has been an honor and a privilege to represent the N for 4 years. … I will always be a Nebraska Cornhusker at heart and a proud Alum.”

While Martinez has put up monster numbers, he’s also one of those guys who seems like he’s been with his team forever. That’ll happen when you’re a starter as a true freshman but then find yourself moving in and out of the starting lineup over four years due to poor play, injuries, and competition. He’s also getting a chance at an extra year in college football since the NCAA granted players an additional year due to the COVID-19 pandemic-affected 2020 season.

All of that led a lot of college football folks to wonder how in the world Martinez is not only still playing but still has eligibility left.

Mr. Martinez is our first ever client to take advantage of our AARP discounts https://t.co/zqHsh3fkt3

This dude has been a starting quarterback for like six years how does he have any eligibility left? https://t.co/2aYA670DdY

How does this guy have any eligibility left? I swear he’s been a Cornhusker since 2015. https://t.co/QvaRhpb0vH

Jokes aside, the 21-year-old could be a great addition for a school looking to bolster its quarterback corps. Even if they bring him in to challenge an incumbent, there are plenty of schools that would kill to have a guy with his experience and desire to prove the critics wrong.