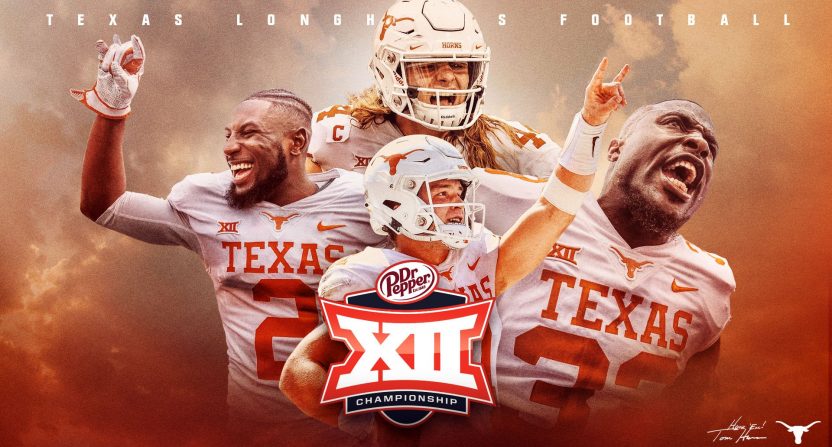 For the first time since 2009, the Texas Longhorns will play in the Big 12 Championship Game. Granted, the game did not exist from 2011 through 2016, but it has to feel good to be a Texas fan today as the program has waited a long time to get back to this stage.

THE HORNS ARE BIG 12 CHAMPIONSHIP BOUND!!!

The last time Texas played in the Big 12 title game was back in 2009 when the Longhorns kept their BCS National Title dreams alive with a last-second field goal by Hunter Lawrence to beat Nebraska, 13-12. The kick came after Texas was awarded one final second after a pass by Colt McCoy landed out of bounds. It is still arguably the most famous second in Texas history and the most agonizing second in Nebraska history. Texas would go on to play in the Rose Bowl for the BCS national championship. Their opponent, Nick Saban and the Alabama Crimson Tide, was just beginning their rise to power and Texas was the first sacrificial lamb standing in the way. As Alabama ascended and won the title, Texas was about to go on the decline.

Next season, Texas failed to meet bowl eligibility with a record of 5-7. The Longhorns returned to the postseason the next year but a record of 8-5 was hardly good enough to clear the bar that had been raised under Brown in Austin. A 9-4 season and another 8-5 year after that and Texas boosters started to get frustrated with the lack of national championship caliber competitiveness from the program. The success at Oklahoma and a positive transition to the SEC for Texas A&M at this time didn’t help either. Maybe it was a messy situation that never needed to spill anything, but the end result was Texas showing Brown the door and hiring Charlie Strong to take over from there in 2014.

Simply put, the hiring of Strong didn’t work out. Depending who you ask, Strong either had more than enough time to turn things around and failed Texas influencers once again forced a change because they had seen enough. The job was then handed to Tom Herman, who had quickly ascended as head coach at Houston and seemed like the ideal candidate for taking Texas back to the promised land.

Herman’s first year showed some steps forward but a record of 7-6 was not the instant fix some Texas fans had hoped for. Even this year, with a record of 9-3, there were still some moments that showed the Horns still has room to improve. Even though Texas is heading to the Big 12 Championship Game, their 24-17 victory Friday over a flailing Kansas team supports the notion that while the program is moving forward, they still have a way to go before getting back to a finish such as they had in 2009.

Texas will find out who their opponent will be in the Big 12 Championship Game when Oklahoma and West Virginia battle it out Friday night at 7:00 p.m.