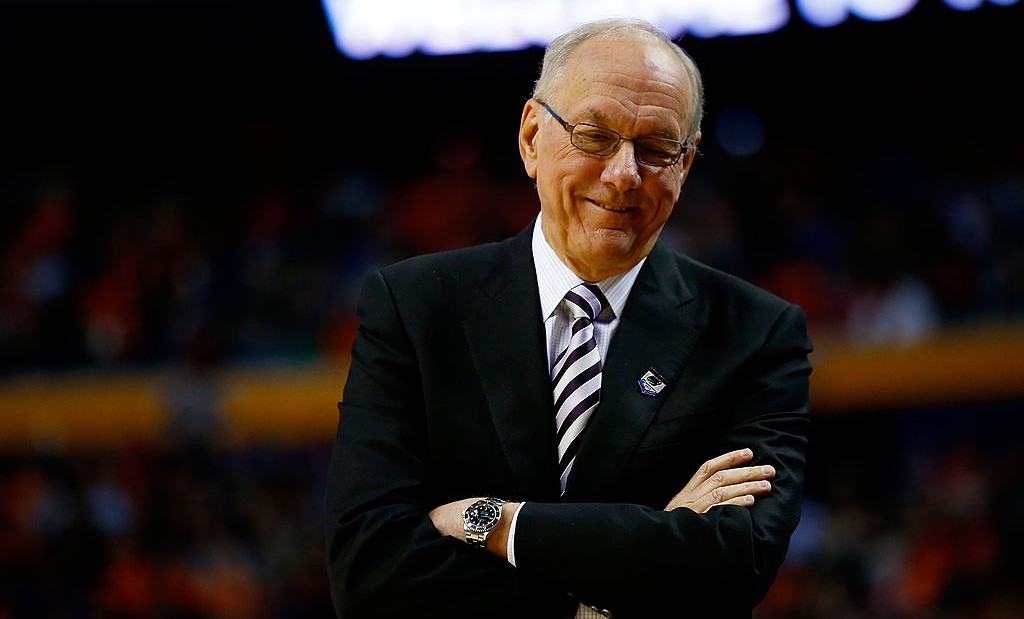 With his team comfortably ahead, Jim Boeheim grinned slightly. When the game clock expired, the 71-year-old waved triumphantly to the joyous Syracuse fans who made the 888-mile journey to St. Louis. It’s amazing what two dominating victories in three days can do for one’s mood.

Syracuse’s magical March turnaround continued after vanquishing upstart Middle Tennessee 75-50 Sunday night at the Scottrade Center. Syracuse was left for dead at the end of the regular season after finishing 1-6 down the stretch. Don’t close the casket yet. The Orange (21-13) advanced to a Sweet 16 matchup against No.11 Gonzaga (28-7) in the Midwest Region in Chicago. It’s the only meeting of double-digits seeds in the Sweet 16.

How did this program come so far in a short time? It did so with great second-half play against Dayton and Middle Tennessee, outscoring both by a combined 84-46 after the break. The Orange’s famous 2-3 zone stifled Middle Tennessee into 29.7 percent shooting. The Blue Raiders, who were 11 of 19 from 3-point range to upset Michigan State, were 8 of 24 from beyond the arc Sunday.

Syracuse broke open a close game with a 21-2 second-half run to take a 61-41 lead with 6:18 left. Middle Tennessee’s and Reggie Upshaw and Giddy Potts collected 21 and 19 points respectively against Michigan State. They totaled 11 Sunday, lost in the length of Syracuse’s zone. That effort was enough to make Boeheim feel giddy.

Boeheim’s unlikely Sweet 16 appearance caps one of the more trying seasons in his program’s history. A self-imposed ban due to NCAA violations kept Syracuse out of the 2015 tournament. This season, Boeheim served a nine-game suspension due to multiple violations that included impermissible benefits, academic misconduct and a lack of institutional control.

The Orange went 4-5 during Boeheim’s absence, including a soul-crushing loss to St. Johns (8-24). According to SI.com, Boeheim spent the forced sabbatical watching cooking shows and reading crime novels. What would you expect? This is the same man who once bragged to the New York Times that he has never sent an email.

When Boeheim returned, that didn’t solve Syracuse’s problems. The team lost to Louisville, Pittsburgh (twice), North Carolina and Florida State. A thin résumé left many wondering if the Orange deserved to get into the NCAA tournament. Even Boeheim said he was “90 percent sure” the Orange wasn’t going to get at at-large bid before he saw the selection show.

He also said “Nobody that said we didn’t deserve to be in obviously doesn’t know anything about basketball.” (Kenpom.com seems to support Boeheim’s argument. The Orange was rated No. 29 as of Sunday night).

But once a team gets in anything can happen. A rout of Dayton coupled with Michigan State’s upset loss opened the door to possibilities. The Orange kicked that door wide open.

If Boeheim feels any sense of vindication, he didn’t gloat Sunday.

“You know, I think we just have to make sure we understand that there’s a lot to be done, a lot can be done,” he said. “A lot of good things can happen and we have to focus on that, the next game, and not really look backwards. There will be time to look backwards some day.”

For his players, there is definitely a sense of relief.

“It feels good, and to win both of these games,” senior guard Trevor Cooney said. “I mean, it’s unbelievable. We just have to keep it going.”

Added fellow senior Michael Gbinije, who scored a game-high 23 points Sunday: “Just every win is a great accomplishment. I’m happy for me and my teammates.”

Syracuse is the sixth ACC team in the remaining field. Maybe the strength of the conference is paying dividends. The Orange’s overall strength of schedule is ranked No.23 by Kenpom.com. After being battle-tested they are playing their best basketball.

“Well, we knew it was a hard conference,” Boeheim said. “We were in it all year. And when we played outside the conference in the tournament we had some success. And we struggled in the conference for the most part because we were playing good teams, really good teams. And it’s hard to judge a conference during the year. I mean, it is hard.”

Perhaps no active coach is more synonymous with a basketball program than Boeheim. He’s been a part of Syracuse basketball either as a player, assistant or head coach since 1962. He’s won a national championship – thanks to Carmelo Anthony in 2003. He has been to the Final Four as recently as 2013. But Boeheim is running out of time for another run. He is scheduled to retire after the 2017-18 season with longtime assistant Mike Hopkins talking over.

For now, though, this team is still all about Boeheim.

The once inconceivable doesn’t seem so crazy now: another trip to the Final Four.

All the Orange has to do is beat a Gonzaga team that probably needed to win its conference tournament to get into the NCAAs. If Syracuse reaches the Elite Eight, it would most likely face fellow ACC team and No.1 seed Virginia. Syracuse and Virginia met only once in the regular season with the Cavaliers winning 73-65 in Charlottesville. That was a one-possession game with 29 seconds left.

While many of his peers have faded into retirement, Boeheim might be coaching his way to one of his most rewarding seasons.

Someone asked Boeheim if perhaps the Orange was under-seeded.

“It’s very hard to pick this tournament and then it’s extremely hard to seed this tournament, I think,” he said. “But the bottom line is you get in. You have that opportunity and you’re going to have to beat somebody good. It’s just as simple as that.”