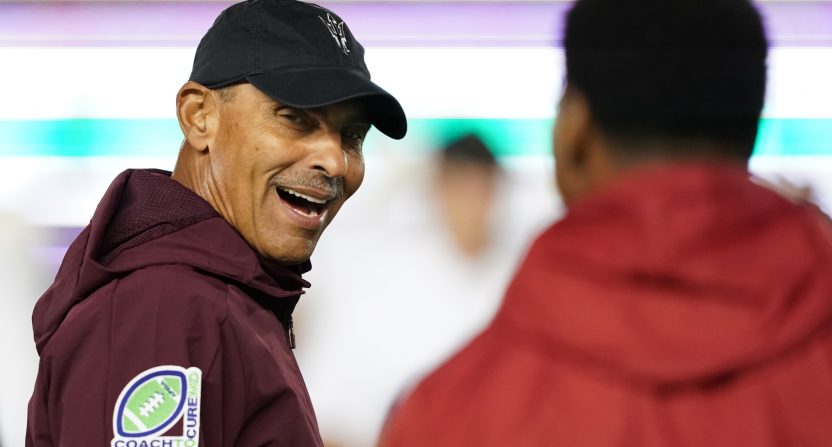 Of all the second year coaches in college football, who would have thought Herm Edwards at Arizona State would arguably be having the most success? The questionable hire by Arizona State to bring in Edwards, who last coached in 2008 before taking the ASU job has reached a point where he has been one of the best hires of the 2017-2018 coaching carousel. After picking up another road win against a ranked opponent, it’s time to give Herm Edwards some props.

Arizona State upset No. 15 Cal on the road late Friday night, giving ASU its second win of the season against a top 20 team. At 4-1 overall and 1-1 in Pac-12 play, the Sun Devils look like they will remain in the mix for the Pac-12 South on the strength of their defense and a gritty offense with a flair for the late-game heroics. For a coach known for his own gritty style and tenacious approach to defense, that may just be the formula Edwards prefers in Tempe.

When it comes to offense, there is still a good amount of room to improve for the Sun Devils. Arizona State entered Week 5 of the college football season with the Pac-12’s No. 9 total offense (376.8 yards per game), ahead of UCLA, Cal and Stanford and a considerable distance removed from No. 8 on the list, Colorado (434.8 yards per game). But what Arizona State lacks in the offense, they make up for with defense. Arizona State held Cal to just 245 yards of offense Friday night (not surprising considering the offensive ranks just referenced). More importantly, the offense once again found a way to get the points they needed at the absolute most critical time against a solid defensive team.

After Cal took a 17-14 lead in the fourth quarter, Arizona State took over with 10:50 remaining and went on a 15-play drive ending with a short touchdown run by Eno Benjamin to go up by four. The drive consumed just over six minutes, which is massive in a defensive battle like this game was expected to be and was. With the defense rested, and Cal playing with a backup quarterback due to Chase Garbers’ injury, Arizona State forced a quick turnover on downs and tacked on a late field goal to extend the lead to seven.

Quick side note, it is difficult not to respect Edwards. After Garbers fell to the ground hard at the end of a run, Edwards was the first on the sideline to check on the injured Cal player.

The victory was somewhat reminiscent of Arizona State’s earlier road win against Michigan State. Michigan State scored a touchdown midway through the fourth quarter to take a 7-3 lead in another defensive showcase. But on the final offensive possession for the Sun Devils, they got the job done against all odds. In a game where Arizona State managed just 216 yards of offense, the Sun Devils strung together 75 yards over 11 plays to stun the Spartans in East Lansing. Once again, it was Benjamin scoring the short touchdown for the lead.

Is this the kind of luck that can lead to a Pac-12 title? Probably not. The schedule still has some difficult hurdles on the way with a home game against Washington State, a road trip to Utah and games against USC and Oregon later in the year. Arizona State’s strength is clearly on their defense, so the offense should have more opportunities to come through in the clutch. If nothing else, there is proof that turning a game off on Arizona State in the fourth quarter is not advisable.

That is a credit to the grit Herm Edwards has implemented in the Arizona State program.