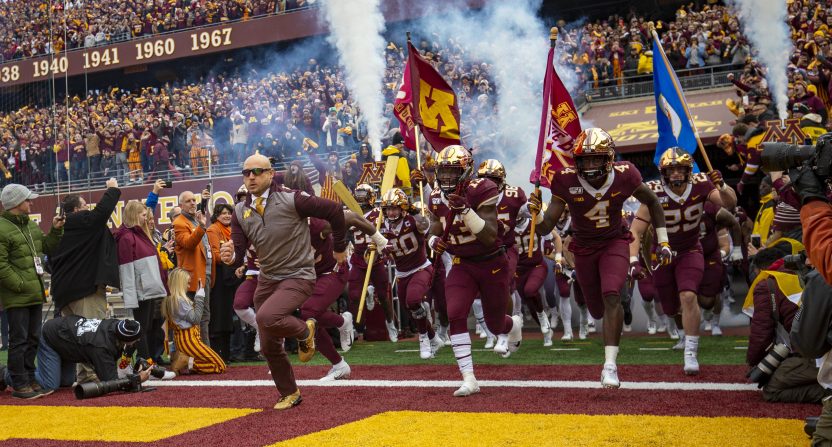 It has been a long time coming since the Minnesota Golden Gophers were off to a 9-0 start to a college football season. The last time it happened was in 1904, when the Gophers opened the season with a 107-0 victory over Twin Cities Central High School and shutout their first eight opponents, highlighted by a 146-0 shellacking of poor Grinnell. Since that 1904 season, Minnesota has had some great moment son the football field, including some national championship titles along the way, but the 2019 Gophers arguably scored the biggest victory the program has seen in decades.

No. 17 Minnesota didn’t just hand No. 4 Penn State a 31-26 setback. Minnesota handled Penn State in all areas from start to finish in a game that didn’t exactly feel as close as the final score would indicate. Minnesota started the game by having Antoine Winfield Jr. pick off a deep pass by Sean Clifford and the offense quickly capitalized with a 95-yard touchdown drive that included a 66-yard touchdown from Tanner Morgan to Rashod Bateman. Although Penn State would come back to answer that touchdown, the Gophers never trailed in the game thanks to that quick start.

As if being the first team to score a first-quarter touchdown on Penn State this season wasn’t enough, the Gophers did it again on their next offensive series. There could not have been much of a better way for Minnesota to start off a game that presented itself with the ultimate statement opportunity. Two long touchdown drives in the first quarter against a defense that had not allowed a single first-quarter touchdown all season was the result of a team that has good, veteran players and was prepared for the task at hand.

The defense also made the plays they needed to make. Minnesota took a 31-19 lead at the start of the fourth quarter but Penn State battled back. Down 31-25, Penn State was one play away from taking their first lead of the game with a drive deep into Minnesota territory in the final minutes. But a third interception by the Gophers slammed the door shut on the Nittany Lions.

Minnesota has had a number of character-building moments this season. The season started off with some hard-fought close victories in non-conference play. This game was reminiscent of that, and perhaps there is something to be said about the experience and confidence established form those earlier close calls. Minnesota could have wilted under the pressure as Penn State’s offense got in their groove, but instead, Minnesota continued to use their secondary as their strength and it paid off.

Penn State was just ranked in the top four in the country by the College Football Playoff selection committee while the same committee showed absolutely no respect to Minnesota, ranking the Gophers a handful of spots below where the voter sin the AP and coaches polls did this week. That is about to change in a big way for Minnesota. How much movement the next batch of playoff rankings will be fascinating. Penn State may not take a huge tumble, but Minnesota absolutely deserves to be making a big move to jump ahead of the Nittany Lions. But putting the playoff picture to the side, Minnesota took a huge step toward playing in their first Big Ten championship game.

Minnesota came into the week with a two-game lead on both Iowa and Wisconsin (who were playing on Saturday). A loss to Penn State would have likely forced Minnesota to have to beat both Iowa and Wisconsin, but now the Gophers may have to win just one of those games, along with avoiding an epic upset at the hands of Northwestern. For a team that continues to build more and more confidence, the odds Minnesota plays for a Big Ten title are beginning to be much more favorable.

Sure, the dream may come to an end against Ohio State in Indianapolis, but the path to winning the Big Ten West continues to go through Minnesota, and PJ Fleck may have the strongest oars in the race.