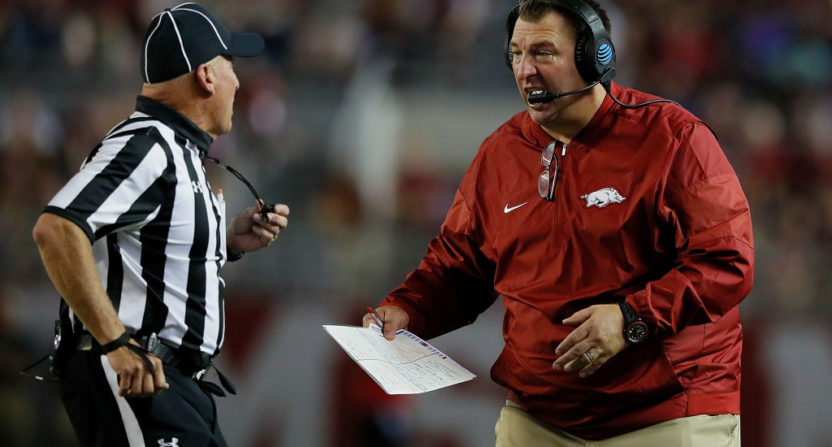 The final nail may as well have been hammered into the coffin of Bret Bielema’s time as head coach at Arkansas. Just days after the university decided to show athletics director Jeff Long the door and with rumors suggesting power players supporting Arkansas are ready to go all in to try and lure Gus Malzahn away from Auburn, Bielema’s Razorbacks were unable to shut the door on an upset bid against Mississippi State (ranked 16th in the college football playoff rankings, 17th in the AP poll). Up 21-14 at home in the fourth quarter, the Razorbacks let one slip away as the Bulldogs scored touchdowns on their final two possessions of the game to get out of town with a win.

The loss dropped Arkansas to 4-7, making them ineligible for postseason play as they fell to 1-6 in SEC play this season. The issues Arkansas has faced this season and in previous years under Bielema do not seem to go away. On Saturday, it was the inability to finish the job and protect the lead.

Take a look at the second-half possessions for Arkansas since taking a 21-14 lead on Mississippi State in the third quarter:

The fumble didn’t end up costing Arkansas, as the Razorbacks were able to force a three-and-out to make up for it, but it was a miscue like that that can turn the game around in a hurry. A holding penalty on Mississippi State did most of the damage to push the football the opposite direction.

If you're the Hogs interim AD Julie Cromer Peoples… Wouldn't it be a power move to can Bielema after one game? Announce who's boss. Maybe even pull in the coaching staff Negan style to see who makes it to Mizzou game. #WPS pic.twitter.com/FJuIYh9Apo

In the past two weeks, we have already seen two SEC schools cut ties with their head coach with a sense that things just were no longer going anywhere. At Florida, Jim McElwain was removed as head coach on Oct. 30, following a week of debate over his claims of death threats. A week later, Tennessee finally made the decision to move on from Butch Jones. Bielema is the next in line on the SEC coaching hot seat, and a loss like this could be what brings everything to a boil after all that has transpired within the program.

Enough should be enough at Arkansas, regardless of who is calling the shots right now. Arkansas far too often has been run over or incapable of holding a lead. The losses vary in levels of agony and pain, and this program is in dire need of a clean slate.

With Jeff Long no longer around to have his back, Bielema could be out as head coach in a hurry as the coaching search is taken over by some overzealous boosters running the show. And this loss may wind up being the final straw.