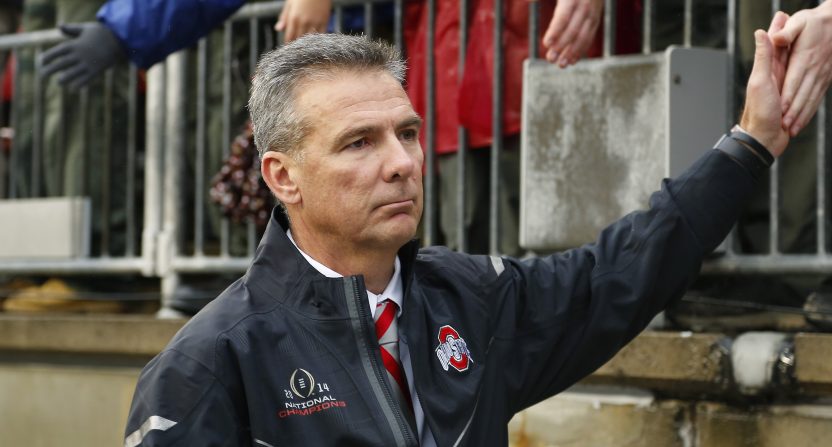 One of the biggest names in the coaching game is set to retire. Again.

Ohio State head coach Urban Meyer will retire as head coach after the Buckeyes play Washington in the Rose Bowl. Offensive coordinator Ryan Day, who filled the role of interim head coach at the start of the season while Meyer served a three-game suspension, will be named head coach, according to a press release from Ohio State’s athletics department Tuesday morning.

Seeing Meyer choose now to retire from the game should not be unexpected. Ohio State was put in a position to possibly force Meyer out earlier this year once it became clear Meyer was not 100 percent truthful about what he knew or didn’t know about Zach Smith’s domestic violence allegations. Instead, Ohio State opted to suspend Meyer for three games and bring him back for a chance to win another Big Ten title and perhaps play in the College Football Playoff. Ohio State did win the Big Ten championship this season but the Buckeyes were the second team out of the playoff picture this past weekend.

Now, Meyer’s career will officially end after he coaches in one of the last of the big four major bowl games he has yet to see, the Rose Bowl. Meyer has coached in the and won the Sugar and Fiesta Bowl (he’s also won the Cotton Bowl if you wish to include that in the mix). Meyer has coached in the Orange Bowl but has not won it, although he did coac Florida to a BCS national title in Miami when the BCS Championship Game was played at the site of the bowls a week later. As far as college football is concerned, there are few ways to go out that are better than winning a Rose Bowl. Ohio State hopes that is the image that is painted next month, although the narrative surrounding Meyer may not be quite as rosy as the Buckeyes and Meyer will hope it will be.

Meyer’s final season was rocky from the start. Despite their success, more and more updates regarding Meyer’s awareness of Smith’s issues with domestic violence continued to be a distraction all season long. At times, the reporting had its own holes along the way, but this was always something Meyer could have nipped in the bud months before the season started. Because he didn’t, it only snowballed as the season played on, beginning with Meyer not being on the sidelines for the first three games of the season.

Meyer established a track record of improving programs to clear high bars everywhere he went during his coaching career. He turned a woeful Bowling Green into an eight and nine-win team at the turn of the century. He followed that up by turning Alex Smith into a household name and building a strong winner at Utah with a 22-2 record, culminating with a 12-0 run to a Fiesta Bowl victory for the Utes. For Utah, the foundation established by Meyer continues to have them growing as Kyle Whittingham has successfully taken the program into the Pac-12 and just this season, played for the Pac-12 championship.

After two big years at Utah, Meyer got his shot to land a gig with a big time program when the Florida Gators hired him after the 2004 season. There, Meyer instantly turned Florida into the national championship caliber program that hadn’t been seen since the height of Steve Spurrier’s run. Meyer took Florida to two BCS national championships before his issues with stress management popped up after a showdown with Nick Saban and Alabama in the 2009 SEC Championship Game. Meyer would retire a year later after Florida went 8-5 in 2010 and ended the year with a victory in the Outback Bowl against Penn State.

Meyer spent a month in the broadcast booth with ESPN as rumors grew about his eventual return to coaching. In 2011, the Jerry Sandusky scandal rocked Penn State, which sent Joe Paterno out the door and also saw Ohio State play a full season with interim head coach Luke Fickell after Jim Tressel had been fired for hiding facts about players receiving tattoos from his boss, Ohio State athletics director Gene Smith. Meyer could have had either job if he wanted, and he chose to return to the state of Ohio to take on the Buckeyes.

As he had done time and time again, Meyer took Ohio State to new heights. Recruiting instantly improved at a program already dominating the recruiting trails around the Big Ten, and Ohio State wasted no time in establishing a winning atmosphere with a 12-0 season in their first season together. A one-year postseason ban kept the Buckeyes out of the Big Ten championship game and postseason. Ohio State went 12-0 again the next regular season before falling to Michigan State in the conference title game and then was steamrolled by a Clemson program on the rise in the Orange Bowl.

The next year, the first for the College Football Playoff, Meyer coached Ohio State into the fourth seed and stunned Saban and Alabama in the Sugar Bowl before taking care of Marcus Mariota and Oregon for Ohio State’s first national championship since their 2002 title win against Miami.

Ohio State has continued to be the dominant force in the Big Ten under Meyer, but questions about what Meyer knew and didn’t know about Smith took the focus off all of the success in Columbus this season. Even though Ohio State put together another playoff-worthy season with another Big Ten championship, Meyer’s image, by his own doing, continued to be tarnished. And that led to speculation that now may be a good time for him to step away from the game.

Meyer will set off into retirement, which will undoubtedly leave some wondering when he will decide to coach again. In the meantime, it will be up to Ryan Day to keep the Buckeyes rolling in the Big Ten, including holding off Jim Harbaugh and Michigan and winning Big Ten titles.