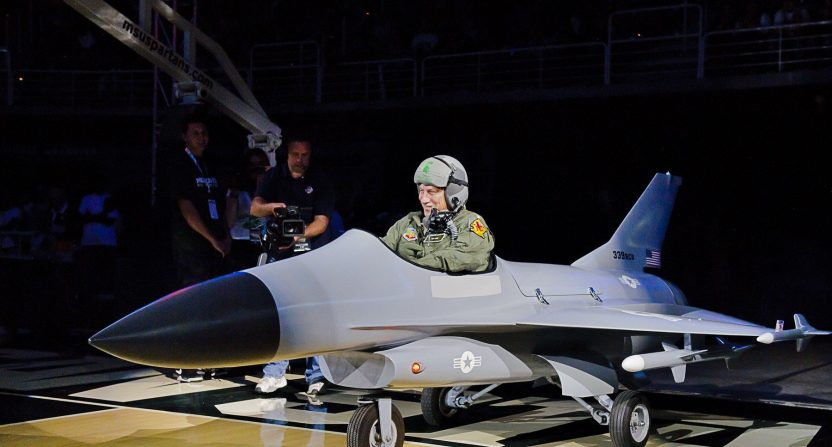 Didn’t we all decide that college basketball games on aircraft carriers were a silly idea? Apparently not as the Gonzaga Bulldogs and Michigan State Spartans have agreed to play one another on Veterans Day (November 11) atop the USS Abraham Lincoln in San Diego.

Matt Norlander reported the long-awaited news, which brings us back to aircraft carrier basketball for the first time since 2012.

Source: Gonzaga and Michigan St. have finalized their upcoming game on Veterans Day on the USS Abraham Lincoln, an aircraft carrier in San Diego. Game will be on ESPN and tip late afternoon out West/prime time on East Coast. Will be CBB's first game on a battleship since 2012.

Norlander notes that, unlike the previous run of aircraft carrier games, this is not planned to be an ongoing thing.

Additionally, as of now, this is not expected to be an annually revived concept. There's no expectation battleship games will be a yearly thing going forward.

The aircraft carrier craze includes five “Carrier Classic” games that took place in 2011 and 2012. However, what was most memorable about the games was that two of them were not completed. A game between Florida and Georgetown was called at halftime when condensation on the court made conditions too slippery. Another game between Marquette and Ohio State was canceled for similar reasons.

According to CBS Sports, “every precautionary effort will be put into avoiding any kind of weather impacting the game.”

There were also concerns over how much the games “meant” when it came time to decide on NCAA Tournament seedings. Given that the game conditions are so unique, some felt that winning one of these outdoor contests didn’t mean as much as it would have otherwise meant.

Regardless, the idea of the game certainly sparked interest around the college basketball world, especially since Gonzaga is likely to head into the season at No. 1 in the preseason polls. And, of course, people also had plenty of jokes, too.

Glad they are doing it this year instead of last year because Chet Holmgren would of been blown overboard by a slight gust https://t.co/Y2d5Hi7B5B

Michigan State and UNC played in the first ever college basketball game on an aircraft carrier in 2011.

They stopped doing these games because the court was unplayable so of course they'll give it another try https://t.co/Nbd2VqUTZS

in the 90s we would have made a kickass action hostage movie based on this premise https://t.co/ylWTHCZNNG

Oh, we're doing this again? Having hilarious flashbacks to San Diego State trying to shoot jumpers over Syracuse's zone in the wind. https://t.co/fwyaLNZjpZ