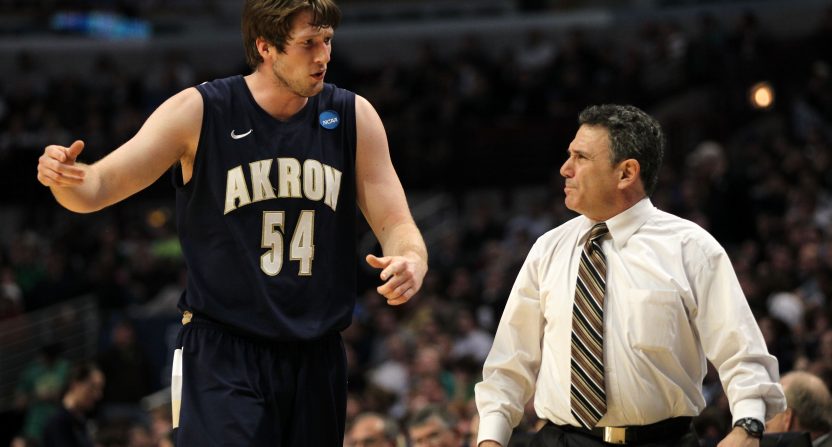 After putting together what looked like the worst coaching search in recent memory, Duquesne made arguably the best college basketball hire of the year so far by landing Akron’s Keith Dambrot.

Since taking over in 2004-05, Dambrot has turned Akron into the best program in the MAC. He has won at least 20 games in all but one season, has four MAC regular season titles and three NCAA Tournament berths, and even once landed a spot in the coaches’ poll top 25. Before Akron, he was LeBron James’ high school coach at St. Vincent-St. Mary, and he’s used the LeBron connection to bring upgrades to the program that few other mid-majors have.

When I met with Dambrot in Akron last year, he told me that he could have had the Duquesne job before, but he turned it down because he’s an Akron guy. But now, after falling short of an NCAA Tournament berth in each of the past two seasons—both while winning the MAC regular season title—Dambrot has decided to move on.

UA coach Keith Dambrot on leaving: "I just thought it was the right time for me."

That might be true for Dambrot, but what does it mean for the MAC’s best program? That’s a fascinating question for a program that is really built almost entirely off of Dambrot’s influence.

Before Dambrot, Akron hadn’t had a 20-win season since 1988-89, the last year of current West Virginia coach Bob Huggins’ tenure. The Zips also hadn’t gone to an NCAA Tournament since Huggins’ tenure. This was a bad program with sub-par facilities. (Even Dambrot told me he thought their home Rhodes Arena was bottom-of-the barrel in the MAC.)

Then the program lucked into Dambrot when it pulled him away from St. Vincent-St. Mary as an assistant, then a head coach. Were it not for an incident at Central Michigan in which he used a racial slur in front of players, Dambrot would have had a much better job than Akron or Duquesne by now. He was an up-and-comer with a Division I job at age 32 before that incident, and were he not (fairly) blackballed from the college game for a decade, he wouldn’t have gone back home to Akron.

But without any other options, he did and he became the night league coach for LeBron James. When he got the job at St. Vincent-St. Mary, he brought James, Dru Joyce, Sian Cotton, Willie McGhee and Romeo Travis—the stars of More Than a Game—with him. That raised his profile enough to be hired by Akron, but not enough for anyone bigger to steal him away.

At Akron, Dambrot used his coaching skills—arguably worthy of a power conference job—and his connections to James and St. Vincent-St. Mary to create an entirely unique program. Behind the outdated arena is a players’ lounge made possible by James. He got the basketball program signed to a Nike deal, thanks to James, even though the rest of the school is with Adidas. The deal includes perks that most mid-majors could only dream of. LeBron also debuted his new shoes at Akron.

Without LeBron—and therefore, without Dambrot—Akron doesn’t become Akron. Dambrot outright admitted that to me when we met:

“LeBron’s a big part of this program, even though he’s still playing, and probably without him, we couldn’t have got it done,” Dambrot said.

Indirectly, LeBron’s clout and connection to Dambrot have worked wonders to bring the best mid-major players to Akron. More connections means more money, and Akron has turned that money into a great travel budget, cost-of-attendance scholarships for players, and all the amenities players at larger schools enjoy, like iPads and focused academic support.

Those connections have gotten Akron some top recruits, too. Star player Noah Robotham told me that LeBron was one of the main reason he committed to the Zips.

“First and foremost, LeBron, this is the best player in the world, good Nike deal,” Robotham said. “You knew you were going to play in big games, and you knew you have LeBron right there.

“The name Akron is kind of booming in a way.”

So knowing where it came from, where does Akron go from here? There’s not another Keith Dambrot, and it was precisely Dambrot’s connections that turned this program into a MAC powerhouse in the first place.

Akron has committed to upgrading Rhodes Arena, which will certainly help in enticing a new coach, and James is sure to remain around the program in some capacity. But will he still be the fixture that he was when Dambrot was there? We’ll learn more in the coming months.

We’ll also learn whether Dambrot’s presence is necessary to maintain the better-than-mid-major-level perks that Akron enjoys, or whether he was just needed to get the Zips to that level. What we do know is that because of Dambrot, Akron is going to have much better choices than it did a decade ago. Before landing Dambrot, Akron wasn’t going to have its pick of the litter.

But now that Akron has had Dambrot, it’s a considerably better job than it was when he took over. Just ask Shaka Smart, the current Texas coach and a former Akron assistant under Dambrot:

“He’s made that program what it is,” Smart said. “People talk about coaching jobs and they say this is a good job or this is a bad job or whatever. Keith has made Akron a way better job. If you look at the history, there wasn’t a ton of consistent winning.”

As it stands, Akron is a historically mediocre (at best) basketball program that has become the king of its conference due to the most unusual of circumstances. The Zips lucked into a hometown kid to coach them and a hometown kid to finance them, and that’s what made their program run.

Now, the coach is gone. Can Akron still be this successful with a typical MAC hire—a coach with no ties from, say, the Southern Conference? Can the average coach be as successful with the same resources as Dambrot?

Even Akron probably doesn’t know the answer as it sets out to fill one of the most unique coaching jobs in the country.