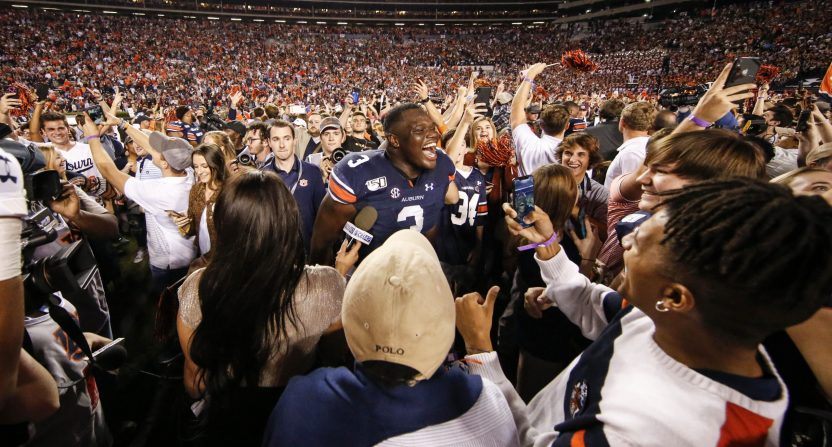 The first half of the 2019 Iron Bowl between Alabama and Auburn was wild. The second half, somehow, lived up to that hype and then some.

Down 31-27 at halftime, the Tigers went toe-to-toe with the Crimson Tide, outlasting them 48-45 thanks to an Alabama 30-yard field goal attempt that clanged off the goalpost with two minutes left.  The loss presumptively knocks Alabama out of the running for a spot in the College Football Playoff (though you never know) and gives Gus Malzahn and the Tigers a marquee victory to re-establish their foothold in the state.

Most figured there was no way the second half could live up to the first one, which featured five touchdowns in the span of five minutes right before halftime. But as Alabama led 31-30 with a little under seven minutes left in the third quarter, their attempt to score a pull-away touchdown somehow turned into a 100-yard Auburn interception for a touchdown. We’re still entirely sure how it happened.

Just like in the first half, as soon as Auburn scored to take a lead, Jaylen Waddle got the lead right back for the Tide. Waddle took a 12-yard pass from Mac Jones for his third touchdown on the day to make it 38-37.

Jaylen Waddle cannot be stopped. His THIRD touchdown of the game. pic.twitter.com/PDjk7yJZRB

Auburn would not go quietly into the night and they kicked a field goal late in the third quarter to take a 40-38 lead into the final period. It was there that Waddle proved he would not be denied, notching his fourth touchdown on the day on a 28-yard pass from Jones. This gave Bama a 45-40 lead with a little under 14 minutes left.

His FOURTH touchdown of the game. Incredible. pic.twitter.com/mypZCE3D43

Unfortunately for Waddle, he couldn’t be out there on defense as well. Instead, Auburn followed up their previous amazing plays with one more amazing play for a score. This time, running back Shaun Shivers took a pitch from 11 yards out, ran directly into an Alabama defender, knocked his helmet off, and then bullied his way into the endzone for a statement-making touchdown.

With a score of 48-45 in favor of Auburn, you had to know this game was going to come down to the final minutes. And so it did, with Alabama’s Joseph Boluvas attempting a 30-yarder to tie things up. It looked perfect at first but then started to curve towards the goalpost, striking it, and falling to the ground. No good!

OFF THE IRON! NO GOOD. pic.twitter.com/kkfxgchwLV

With that, Auburn ran out the clock and finished off another legendary chapter in the legendary rivalry.

THE CELEBRATION IS ON FOR AUBURN. pic.twitter.com/amS1MDl351

Some Auburn fans tried to make their way to the field to celebrate with the squad, but they didn’t account for the most dangerous opponent of them all. The hedges.

storming the field can be tricky pic.twitter.com/W5XmnX07GM

While it might not go down in history the same way as the Kick Six, the 2019 Iron Bowl will be remembered as one of the highest-scoring games in its history. The record is 99 total points in 2014.

It’ll be fascinating to see how the game impacts the College Football Playoff as well as the rest of the bowl picture. You better believe that Oregon, Utah, Oklahoma, and Georgia are all sending Auburn a big Edible Arrangement right now.