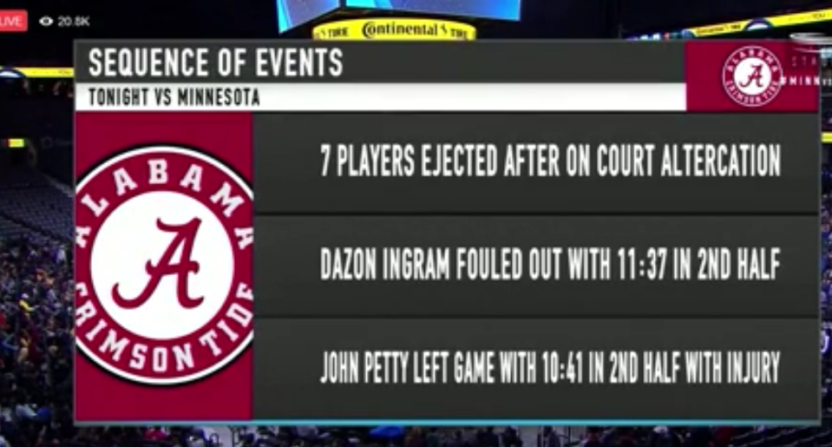 While much of the U.S. was watching Alabama’s top-ranked football team lose the Iron Bowl to Auburn, the 25th-ranked Crimson Tide basketball team wound up in perhaps even a weirder situation. In their game against the 14th-ranked Minnesota Golden Gophers Saturday as part of the Barclays Center Classic in Brooklyn (part of which wasn’t even at the Barclays Center), the entire Alabama bench got ejected for leaving the bench during a confrontation:

This isn't the the Iron Bowl but Alabama and Minnesota had to be separated just now after Nate Mason was ejected for talking smack. Avery Johnson, Collin Sexton also T'ed up. pic.twitter.com/r04ERhScGA

Alabama's entire bench got ejected for leaving the bench. They have five guys for the rest of the game.

Half of Bama ‘s team just got ejected at Barclays Center ??

All the circled players were ejected for Alabama, via @TheAndyKatz pic.twitter.com/bt0wDn6VOI

So that left the Tide with five players. And one, guard Dazon Ingram, received a technical in that scrum and then fouled out shortly afterwards, leaving Alabama with four players with over 11 minutes left:

Dazon Ingram just fouled out. ALABAMA IS DOWN TO FOUR PLAYERS. THERE'S STILL 11:37 TO GO IN THIS GAME. BONKERS! https://t.co/Xf2ybc7kzk

I can’t believe this is actually happening pic.twitter.com/7TcDNtqbrp

They just carried John Petty off the court and he can't put weight on his right leg. Alabama has 3 guys on the court against 5. https://t.co/HCTpiGR0Rs

Unbelievable. 3 players on the court for Alabama against Minnesota with 10:28 left at Barclays Center. 3. And this is not a 3 on 3 tournament.

So if you're scoring at home: On the court for @AlabamaMBB is Collin Sexton, Galin Smith and Riley Norris vs. @GopherMBB. Nine minutes left and Gophers are up 12.

Alabama is playing 3-on-5. pic.twitter.com/5t0MINGNL6

And yet, the Tide kept playing, and they actually played better with only three players.They cut the deficit all the way from 12 points to three at one point, and guard Collin Sexton (who had 38 points, six rebounds and five assists on the night) actually had a three-point attempt to tie it. That didn’t fall, and the Gophers wound up winning 89-84, but Alabama gave it an incredible effort. Even if they didn’t quite cover the spread:

Vegas had Minnesota -4. With only three players, Alabama loses by only five. How do the bookies always know?

And near the end, Sexton even high-fived invisible teammates:

That’s an amazing showing by the Tide’s remaining three players, and one of the most remarkable things ever seen in NCAA basketball. Here’s a video from ESPN showing the whole situation:

Stadium announcer Chris Hassel summed it up pretty well on the Facebook broadcast, talking about the network’s future college basketball coverage. “We’ll have 40-plus games this season in college basketball. None will be as unique, bizarre, and circus-like as this one.”