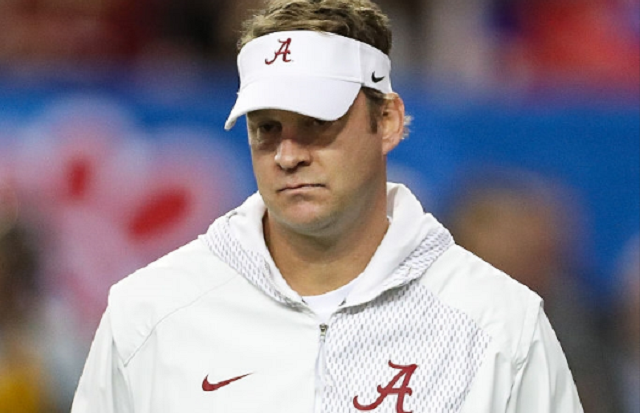 Alabama and Nick Saban has apparently had enough of Lane Kiffin, even with the national title game a week away.

Alabama has one more game remaining in its 2016-17 season: next Monday’s College Football Playoff national championship game versus Clemson. But offensive coordinator Lane Kiffin’s season with the Crimson Tide is finished. Steve Sarkisian will get a head start on taking over Kiffin’s job and call plays against the Tigers.

According to Alabama head coach Nick Saban, the decision was a mutual decision between him and Kiffin.

“We just thought it was in the best interest of our players and our program and for Lane to assume his responsibilities as the head coach at Florida Atlantic,” Nick Saban told ESPN’s Rece Davis during an on-air interview. “It’s our goal as a program to always give our players the best opportunity to be successful, whether it’s personally, academically or athletically.

“This decision was made after we mutually agreed that this would be the best thing for both parties.” Saban made a point of emphasizing the words “mutually agreed.”

But come on — does anyone actually believe this was a mutual decision? There’s one guy who runs the Alabama football program.

Kiffin had already signed on to take the head coaching position at Florida Atlantic, but wanted to stay on with Alabama during its postseason run. Yet from several accounts, Kiffin made himself an unbearable presence among the Alabama coaching staff in preparations for the College Football Playoff semifinal game against Washington. Basically, he was the co-worker who put in his two-week notice and already decided to check out.

Last week, Kiffin told reporters that he didn’t recall any happy moments working for Saban, but remembered all the “ass-chewings” he received from Saban. Even if that was funny, it couldn’t have gone over well with the head coach. Additionally, he also did some extra interviews with reporters following Alabama’s media session last Thursday, making the rest of the team wait for him. Eventually, the bus left without their offensive coordinator. Now, the Crimson Tide will be leaving for Tampa without Kiffin as well.

According to ESPN’s Brett McMurphy, those incidents and Kiffin’s overall behavior — which included being late for meetings — just became intolerable among the other coaches. McMurphy’s sources told him that several Alabama coaches “were done with him.” That obviously included Saban, who felt that Kiffin’s obligations to Florida Atlantic had become too much of a distraction in preparations for the College Football Playoff games. He couldn’t have been happy with Alabama’s shaky offensive performance against Washington, either.

To be fair, it surely is difficult to essentially work two jobs at the same time, which is why you see so many coaches leave their previous positions to begin their new gig (even in the face of intense criticism). Florida Atlantic likely would have waited as long as Kiffin needed. However, it appears that Kiffin’s attention was focused more on his next job. (Taking shots at the boss on the way out couldn’t have helped matters.) He said as much in the official statement released by Alabama:

“After going through these last couple of weeks, trying to serve the best interests of two universities as an offensive coordinator and a head coach, it became apparent that both programs would be better served by me giving all my time and efforts to being the head coach at FAU. After meeting with Coach Saban during preparations last night and this morning, we mutually decided that it was in everyone’s best interests for the players and the program for Coach Sarkisian to take over all responsibilities as offensive coordinator for the championship game.”

Already having Sarkisian on hand with the current coaching staff surely made the decision easier. He’s been an offensive analyst on the staff since September and sat in the coaches’ box during games. Now he’ll be able to speak into the headsets and call plays. That may also keep Sarkisian busy enough where he’s not picking his nose on national television. This look like a good situation for everyone involved on the Alabama side.