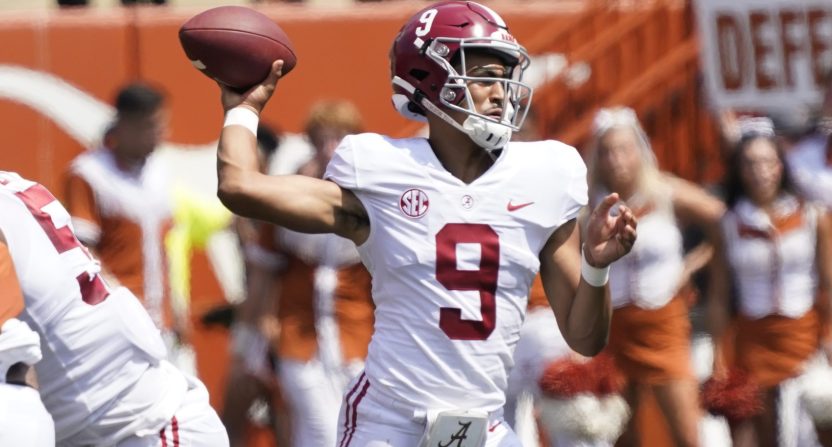 The Alabama Crimson Tide were given all they could handle in their matchup against the Texas Longhorns on Saturday, but Bama quarterback Bryce Young stepped up when it mattered most in crunch time.

Texas kicker Bert Auburn redeemed himself for a previous miss in the game by making a clutch 49-yard field goal with only 1:29 left in the fourth quarter to give Texas a 19-17 lead.

That gave Alabama one chance to march down the field and retake the lead, and Young certainly did not disappoint with this opportunity.

Perhaps the most important play of the game came when Young was nearly sacked on a blitz by Longhorns cornerback Ryan Watts, but managed to escape the tackle and rush for 20 yards to put Alabama into field goal range.

WHAT A PLAY BRYCE YOUNG 😤

This would lead to a 33-yard field goal attempt from Alabama kicker Will Reichard, which he would make to give them a lead they would not relinquish.

WOW 😱@AlabamaFTBL takes back the lead with 10 seconds remaining 🔥 pic.twitter.com/XqWyrSJfYJ

This game was by no means Young’s most impressive, but many have taken notice of his timely game-winning drive and are calling him one of the best quarterbacks in the country.

mobile QBs are sooo valuable this was a game saving play by Bryce Young pic.twitter.com/z0NQGcn2nq

Bryce Young is the TRUTH. Let’s stop trying to compare him and Stroud. They’re not at the same level.

Bryce Young saved the game and Alabama’s season with this one move. #Alabama #Texas

My main takeaway after scouting #Alabama QB Bryce Young this summer: he is a problem solver.

That’s what we saw today in the 4th quarter. Always poised with a skill set to find a solution despite adversity.

Why he’ll be a very high draft pick.

Bryce Young didn’t have his best game by any means but stepped up when it mattered most. Cool, calm and collected on that game-winning drive.

He really is that dude.

Alabama head coach Nick Saban is not typically someone too willing to give out comments, but he has plenty of positive things to say about his quarterback’s heroics following the game.

“At the end of the day, he did a great job when his best was needed,” Saban told Fox Sports sideline reporter Jenny Taft on Young’s game-winning drive. “That’s what we needed.”

"At the end of the day he did a great job when his best was needed."@AlabamaFTBL Coach Nick Saban talked to @JennyTaft about how @_bryce_young stepped it up when it mattered most 💯 pic.twitter.com/w33B4LESaY

Texas did an excellent job of competing in this game despite starting quarterback Quinn Ewers exiting the game with a shoulder injury. Ultimately, Young was able to will his team to a victory on Saturday.