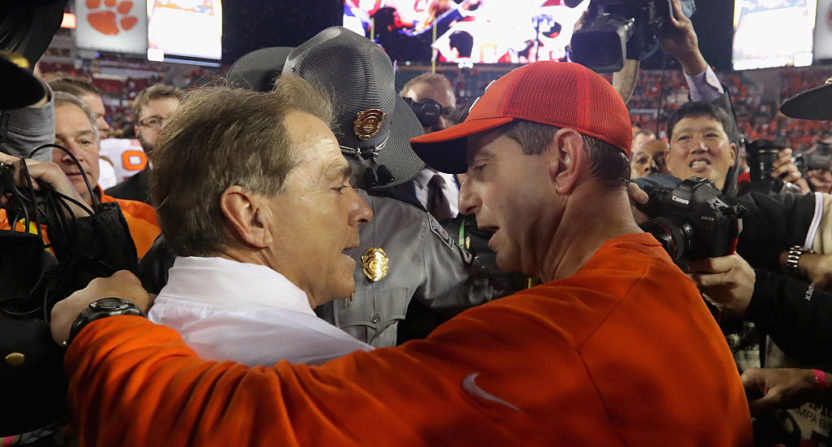 With the introduction of the College Football Playoff back in the 2014/2015 season, some assumed it would help add some unpredictability to the national championship picture. (That is, maybe Alabama wouldn’t win it every year.)

And for the inaugural edition, they were right, as Ohio State upset the Tide in a game that’s still hard to believe happened. And that game might have encouraged people to believe that semifinal upsets could happen year after year, producing fun (or at least unexpected) championship game matchups, while at the very least providing Alabama an extra test on the way to the title.

Then on New Year’s Eve 2015, Alabama throttled Michigan State handily, though they found themselves as the nominal underdog against the No. 1 ranked Clemson Tigers, who handily won their own semifinal over Oklahoma behind DeShaun Watson. And when the two schools met for the championship, it was a hell of a football game, with Alabama prevailing 45-40.

In year three, Alabama and Clemson were again the top ranked teams in the country, they again easily handled their semifinal competition, and they again played a thrilling championship game, with Clemson winning their second national championship (their first since 1981.)

So the last two seasons, the national championship picture has mostly consisted of just Alabama and Clemson, with schools like Washington, Ohio State, Michigan State, and Oklahoma making the Playoff but immediately jobbing out.

Now, after three weeks of the 2017 college football season, Alabama and Clemson once again sit on top of the rankings; Alabama by virtue of their impressive showing against Florida State, and Clemson after wins against Auburn and Louisville. They’re clearly the two dominant programs of the moment, and though it’s always possible one or both slips up at some point during the season, the Playoff actually benefits them in this case. It’s hard to imagine four other unbeaten teams at all, and a one-loss Alabama or one-loss Clemson would have a strong case against any other one-loss team, especially for the third or fourth spot in the Playoff.

Was this what the playoff was designed to do? Should we be satisfied with a system that seems to further reduce parity, rather than capture some kind of “March Madness, but for football” aesthetic some likely hoped for?

Yes, actually, because for three straight years there have been memorable games! And that’s what the system should be going for: entertaining events, with the best teams. And at the moment, college football has two pretty clear-cut best teams, which has fostered a dynastic rivalry the sport hasn’t really seen, even throughout the BCS era. Alabama-Clemson 2 (these should be numbered like action movie sequels, and I’m going to try and start that trend right now) was the first rematch college football had seen since the BCS was instituted in 1999. A lack of parity wasn’t really the problem.

What the Playoff has given us is the best games, which it’s done by both helping ensure the best teams make it to the final four, but also by ensuring the eventual national championship participants will have a game between the end of the regular season and the title contest. Previously, the lengthy layoff led to rusty play, and a bad matchup could get unwatchable very quickly. (Aside from Alabama destroying Notre Dame, which was appointment viewing throughout.)

Now, though, the kinks tend to get worked out in the semifinals, and while that’s not perfect, it’s led to two straight wildly fun championships. Throw away your own fan loyalties as a thought experiment (I’m an Indiana fan, so I have no rooting interest in the playoff picture). Who wouldn’t want to see a rubber match this year? And who isn’t excited to see if someone can knock out either team in a semifinal?

At least for this year. After this year, it’s probably time to find a new action movie franchise.