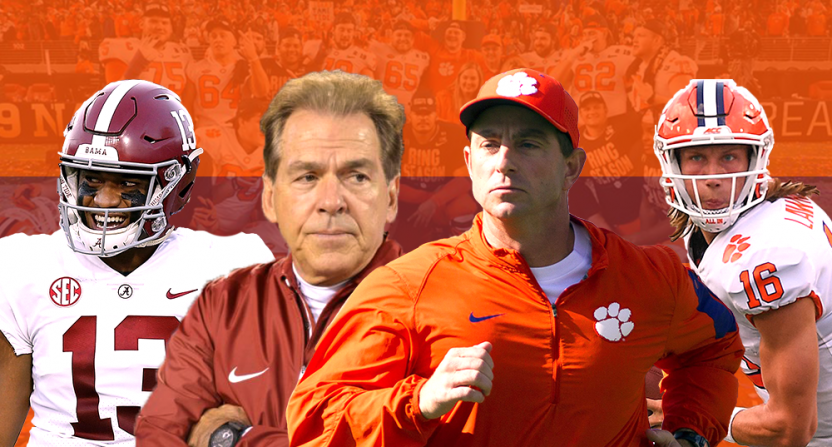 As soon as the clock ran out on the 2019 College Football Playoff National Championship and the Clemson Tigers completed their takedown of the mighty Alabama Crimson Tide, everyone looked around and wondered whether or not the next college football season was even really necessary. After meeting in the title game in 2016, 2017, and 2019 as well as meeting in the semifinal in 2018, there was little reason to think we wouldn’t be back here doing it all over again in 2020 (well, not in Santa Clara).

Sure, we have to go through with the formality of playing out the entire season. Watch the Pac-12 underachieve. Watch the Big Ten blow its chances. Watch the SEC eat itself. And in the end, the College Football Playoff will almost certainly be Alabama, Clemson, and two other bigtime programs who won’t be able to do anything about what’s coming.

Here are five reasons why you know this is true.

Kyler Murray might have won the Heisman Trophy but the 2019 season is going to be all about Alabama QB Tua Tagovailoa and Clemson QB Trevor Lawrence. Both young quarterbacks were more than capable this season in leading their squads to the top of their respective conferences and into the playoff (except for that one time).

Tua won the Walter Camp Award and Maxwell Award and accounted for 46 touchdowns on Alabama’s season. Meanwhile, Lawrence subbed into Clemson’s top spot early in the season and threw for 30 touchdowns against just four interceptions. Given the weapons around both of them ( Jerry Jeudy, Henry Ruggs III, and Jaylen Waddle in Alabama, Travis Etienne, Tee Higgins, and Justyn Ross in Clemson), there’s no reason to think either would drop off all that much, if at all.

Odds are good these two will be locked in a race to the Heisman all season long before they go head-to-head in the championship game once more.

It’s certainly possible that the ACC will improve from the 2018 season. But even then it’s unlikely that the conference will be able to provide too many threats to Clemson’s dominance. The conference remains Clemson’s to lose and the odds are good that they won’t.

It’s not that their schedule is a cupcake row. They’ll host Texas A&M and travel to South Carolina in the nonconference slate. Their first trip back to the Carrier Dome since being upset by Syracuse looms, and the Orange is a much better program than they were even two years ago (giving the Tigers their biggest scare of this season, too). And of course, there’s FSU, Boston College, and NC State who’ll love the chance to shock the world. But, of course, Clemson seems to have figured out how to hold down the fort. And make no mistake, right now, the ACC is their fort.

Recruiting Will Make Up For Any Losses

Yes, both teams will lose valuable talent from the 2018 season, especially on their lines. Alabama will have to deal with the loss of left tackle Jonah Williams and defensive tackle Quinnen Williams. Meanwhile, Clemson is looking at the loss of four elite defensive linemen (Christian Wilkins, Clelin Ferrell, Dexter Lawrence, and Austin Bryant). Plenty of schools out there would need a couple seasons to rebuild those units after losing so much talent. But not Alabama and Clemson.

Depending on who you ask, Alabama has arguably the No. 1 recruiting class this year while Clemson also has a top ten class to call it’s own. Dabo himself said that he’s not worried about losing all those D-linemen and that people have no idea how good the next crop of talent is. Who is going to doubt him?

You hear a lot about the minefield that the SEC presents each year, and that’s true for most teams. But not Alabama. The Tide plays in the toughest division in the toughest conference every season and yet they always find a way to the CFP anyway. There’s no reason to think that won’t happen again.

Alabama’s 2019 schedule doesn’t include Georgia or Florida, though they’ll probably see one of them in the SEC Championship. Somehow, they’ve also been gifted with a bye week before both their games against LSU and Texas A&M, giving them just about every advantage they need.

Besides, we all know that even if Alabama loses one game along the way, that’ll still be good enough to get them in the CDP, no matter when that happens.

Nick Saban is the cream of the crop when it comes to college football head coaches. There’s no denying it. Saban owns six national titles, eight SEC titles, and has put Alabama in the College Football Playoff every season since it started. He is so far ahead of everyone else that it’s not even a discussion.

But Dabo Swinney has sure done a good job to make it clear he’s No. 2 overall and that also isn’t close. Especially now that Urben Meyer is out. There’s no denying that Swinney has not only built a dynasty at Clemson, but the really exciting part is that he might only be getting started (especially since the only job he’d probably ever leave for is Alabama). In 11 seasons, Dabo now has two national titles, five ACC crowns, and a 115–30 overall record. He’s had Clemson in the CFP in four consecutive years and a fairly easy road back there for number five.

As The Joker told Batman at the end of The Dark Knight, “you and I are destined to do this forever.” When it comes to Nick and Dabo, that might be particularly apt.