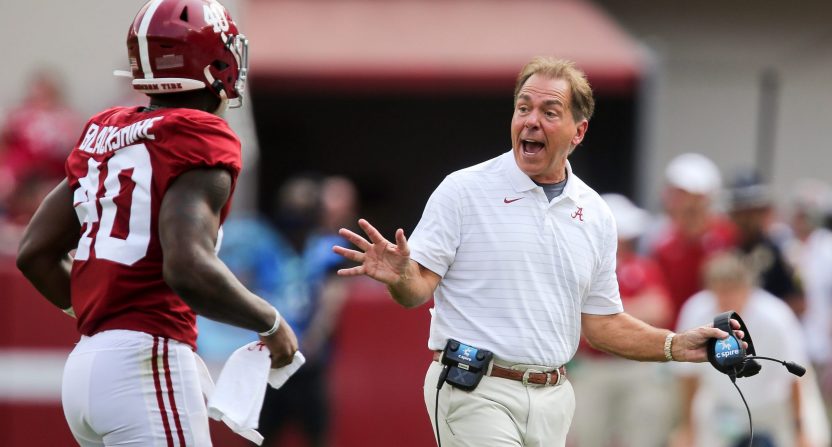 As soon as Texas A&M kicker Seth Small’s field goal kick crossed the uprights to complete the Aggies’ epic upset of No. 1 Alabama Crimson Tide, you know what was going to happen next. It was inevitable.

Someone was going to declare Alabama’s dynasty dead.

It happens all the time and it’s been happening for almost a decade now whenever the Tide gets upset or loses a big game. It’s somewhat understandable given that Nick Saban’s dynasty has been going for so long that it actually has two different eras. There was the first era (2008-2014) in which Alabama won three national titles before “sputtering out” with back-to-back two-loss seasons. When that happened, it seemed like everyone was falling all over themselves to call for the end of the dynasty.

"The dynasty argument is about a state of mind, a state of being. That's gone. That no longer exists at Alabama." – @DanWolken

But, almost immediately in 2015, the second era of the dynasty began when Alabama the Dynasty became Alabama the Destroyer. The Tide has made it to the national title game almost every season since, winning three more championships in the process, and only losing twice in a season one time.

Along the way, with each upset or CFP National Championship Game loss, plenty more people called the dynasty dead only to be proven wrong within a few months. Often sooner.

Here's a tidbit I came across in my research today. Alabama is 25-0 since the last round of "Alabama's dynasty is dead" columns.

Once the Texas A&M faithful stormed the field last weekend, everyone looked around to see who would be dumb enough to write the latest “Alabama’s dynasty is dead” column that we’d all look back on five years from now and laugh about.

Someone please write the "Alabama dynasty is dead" article

And yet…when the time came…no one did. All of the usual suspects seem to have learned their lesson. All of those who came after appears to have learned from them as well. Certainly, there were plenty of people writing about how Alabama was exposed (which they were) and that their chances of making the College Football Playoff were in peril with an SEC Championship Game showdown against Georgia potentially ahead of them (which is true). But no one seemed willing to declare the dynasty officially over.

While we have a lot of fun with these completely incorrect takes, they’ve always felt a little too easy, a little too obvious. It’s a gimme hot take. A really great team loses so you say that their time atop the pile is over and, in many cases, the odds say you’ll be right. Very few great college football teams become dynasties and very few dynasties last beyond 5-6 years.

The Alabama dynasty, however, is on Year 14 (give or take) and when you get to that point, you’re only dead when you actually die.

Given everything we know, there’s absolutely no reason to think Alabama can’t still make the CFP this year. Even if they don’t, there’s no reason to think Alabama can’t regroup next season. Guess which program currently has the No. 1 2022 recruiting class in the nation? Even if Alabama loses some of its top assistants, there are always former NFL and college head coaches looking to rejuvenate their reputations. The cycle continues and repeats itself.

In other words, the lesson has been learned that no one gets to say Alabama’s dynasty is dead until it actually happens. Until then, you’re simply setting yourself up for failure. Something that Nick Saban is extremely good at avoiding.