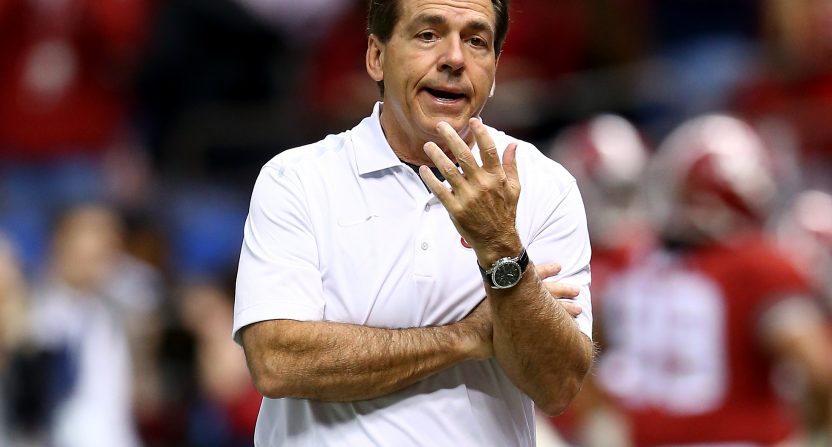 National Signing Day is celebrated nationwide as a time when high school athletes get to make their college picks, and while it is a joyous day for many players, some coaches still show how they hold all the power in the process and can screw over athletes.

That’s what happened when Alabama, which had offered four-star defensive end Jarez Parks a spot in its class, decided the day of National Signing Day that it would not be honoring that offer.

As it turns out, the Crimson Tide went over their 85-scholarship allotment when they were offering scholarships, and only had room to take one more player on National Signing Day. Even though they offered Parks a scholarship, they decided they didn’t want him, as they were hoping for another player to sign with them.

This comes after Parks went all the way to the Eiffel Tower to film a commitment video with Bleacher Report in which he picked the Crimson Tide.

This morning, Parks had to delay his commitment upon finding out that his offer would no longer be honored.

Ultimately, he announced that he would “grayshirt,” meaning he will not be able to join the team until next January.

Parks’ whole ordeal underscores the hypocrisy of the college sports system. The National Collegiate Athletic Association does not allow schools to pay athletes, as the NCAA and university athletic departments prefer to keep all of the money for themselves. They have been able to maintain that model because they have convinced the courts that athletes primarily sign to go to school, not play sports. However, it’s clear that Parks’ offer was changed due to his athletic ability, not his academic ability.

In reality, Alabama and coach Nick Saban took advantage of they fact that they owe recruits nothing, so they made a promise to Parks that they knew they wouldn’t have to keep, forcing him to abruptly change his college plans. That’s not right, and it’s a purely business move, even though the NCAA claims that scholarship offers are educational in nature.

National Signing Day can be great for a lot of people, but it’s also a reminder that at the end of the day, schools hold all the power, and they’re willing to screw over recruits if it means another player can help them better stuff their pockets with cash.