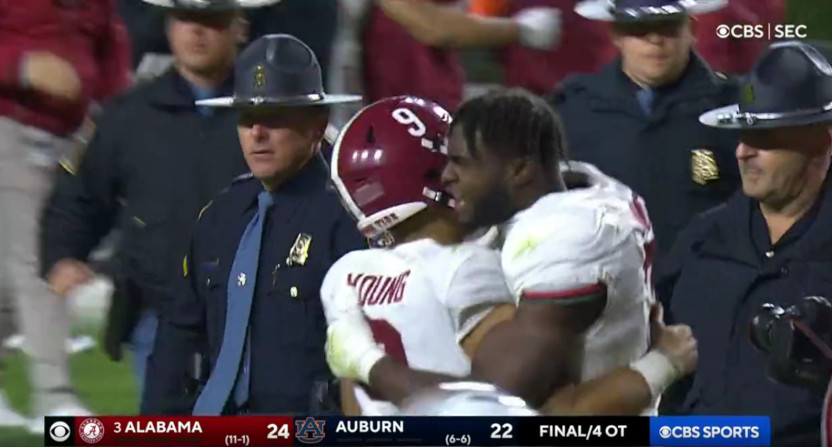 The Auburn Tigers were within a minute of beating the No. 3 Alabama Crimson Tide in the 86th Iron Bowl game Saturday, but the Tide came through with a game-tying touchdown in the final minute. That sent the game to overtime, where the sides battled back and forth through three overtimes, but Alabama came out on top in the fourth thanks to a defensive stop by DB Kool-Aid McKinstry and a two-point conversion catch from WR John Metchie III, getting a 24-22 4OT win and staying in great playoff position.

It looked like this wasn’t even going to get that far, especially after a late fourth-down stop by Auburn.  But the Tigers weren’t able to kill enough clock, and the Tide got the ball back. And then, on a third-and-10 play that started from the Auburn 28 with 29 seconds on the clock, Alabama quarterback Bryce Young dropped back and found Ja’Corey Brooks racing to the corner. Brooks made a great end-zone catch and got one foot down inbounds.

The extra point from Will Reichard meant the game was headed to overtime, for the first time in the history of the Iron Bowl. And Alabama promptly scored on their first possession there, with Young finding Slade Bolden in the end zone:

However, Auburn responded with a touchdown of their own, with Landen King making a one-handed grab on a pass from TJ Finley:

An Alabama defensive stand led to Auburn settling for a 49-yard field goal attempt, but kicker Ben Patton (only playing thanks to an injury to Anders Carlson) made that, a career-long for him:

Will Reichert responded with a 38-yard field goal for Alabama, sending the game to the 2-point conversion shootout new this year for the third overtime and beyond.

In the third overtime, Young hit John Metchie III for a successful conversion.  But Auburn responded, with Finley finding tight end John Samuel Shenker. In the fourth overtime, though, Alabama defensive back Kool-Aid McKinstry made a huge defensive play to knock down Finley’s pass:

This defensive play from Kool-Aid McKinstry in the fourth overtime was crucial to Alabama's #IronBowl win. pic.twitter.com/xOIKaehKNJ

And Young then hit Metchie again (who’s shown at top celebrating with him afterwards) for the game-winning score:

ALABAMA WINS THE IRON BOWL IN THE 4TH OVERTIME pic.twitter.com/TObJVCaydp

That was a remarkable survival from an Alabama team that was exceptionally close to losing this game. But they pulled off the escape, and improved to 11-1 on the year.