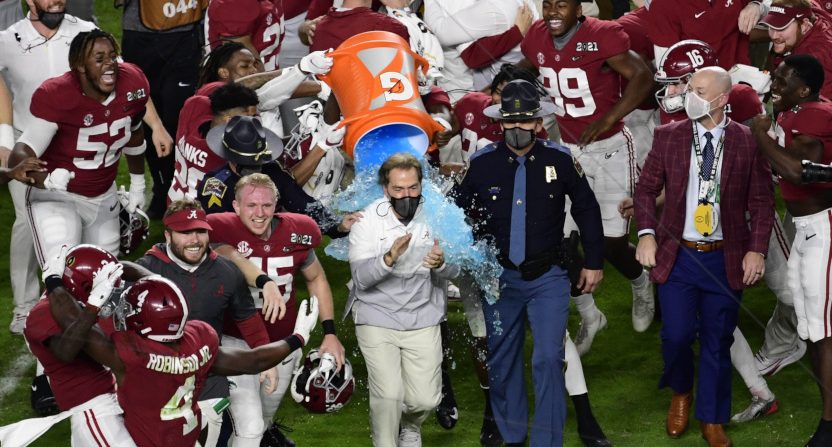 Once again, the Alabama Crimson Tide are on top of the college football world. The Tide (ranked No. 1 in both the AP poll and the College Football Playoff rankings) beat the Ohio State Buckeyes (#3 in both) 52-24 in the CFP national title game Monday night. Alabama jumped out to a 35-17 halftime lead, fueled by 12 catches for 215 yards and three touchdowns from Heisman Trophy winner DeVonta Smith (who would later leave with a hand injury), and they never looked back. Here are two of Smith’s early touchdown catches:

Look at all of the pre-snap movement from DeVonta Smith, before he burns the Ohio State defense in space. He's unstoppable.

DeVonta Smith… what more can you say?

IT'S STILL THE FIRST HALF. pic.twitter.com/afQeQBKkYH

Of course, Ohio State dealt with a lot of injuries and limitations here. They were missing several key players for this, including two starting defensive linemen, and they lost running back Trey Sermon early on and offensive lineman Wyatt Davis later. But Alabama had their own injury issues, including not having Smith for most of the second half. And in the end, the Tide came up with a dominant win, and claimed their sixth national championship in the last 11 years (2009, 2011, 2012, 2015, 2017, and now 2020).

That marked Alabama head coach Nick Saban’s seventh national title overall as a head coach (he also won at LSU in 2003). And that moved him past legendary Crimson Tide coach Paul “Bear” Bryant, who recorded six national titles (all with Alabama, where he coached from 1958-82). That’s a remarkable achievement, and it shows how special Saban’s run with the Crimson Tide (where he’s been coaching since 2007) has been.