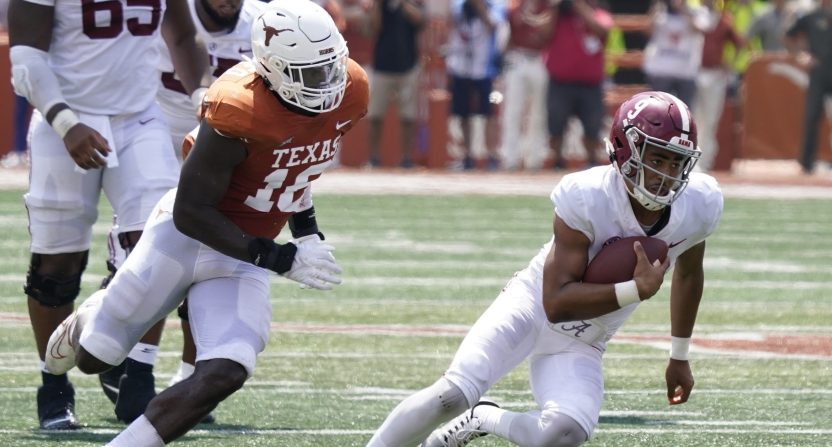 It wasn’t pretty at times for Alabama but their play in the fourth quarter was enough to outlast the Texas Longhorns, 20-19 behind last year’s Heisman winner Bryce Young.

In the latter stages of the game, Young led the Tide down the field on two scoring drives, one to take the  17-16 lead and the last drive that allowed Alabama to kick the game-winning field goal with 10 seconds left for the victory.

Young looked like every bit the Heisman winner as he led the Crimson Tide down the field. On the  Tide’s game-winning drive, the quarterback made a spectacular play on what could have been a sack. Young instead avoided the sack and ran for 19 yards and a first down, which all but sealed the game.

Young completed 27-39 for 213 yards and one touchdown and zero interceptions. He was also helped out by the Bama defense, who kept the Longhorns out of the endzone in the fourth when they took the 19-17 lead late in the fourth quarter.

The defense was anchored by linebacker Will Anderson, who garnered his first sack of the season at a critical moment late in the fourth. The All-American linebacker struggled Saturday, receiving four penalties, but when it mattered, he stepped up when he was needed.

Alabama quarterback Bryce Young: "Those crunch times moments, that’s what we’re made for."

Still, it was the play of Bryce Young in the closing moments of the game that saved it for No. 1 Alabama.

My biggest takeaway from today’s Texas-Alabama game is that Crimson Tide fans better thank the Lord they never schedule Kansas.

The State of Texas hasn’t inflicted that much damage to Alabama’s heart health since they introduced Blue Bell.

I’m rarely in the “refs are ruining the game” crowd, but Texas is getting JOBBED against Alabama.