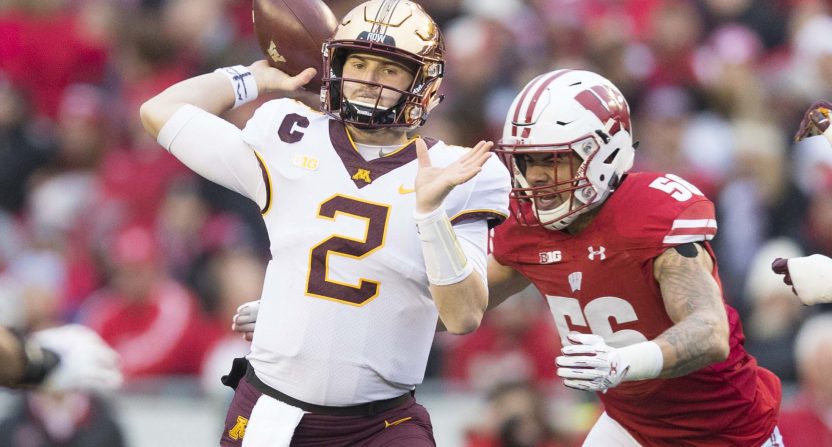 The final week of the college football season is now upon us, and there will be some division races to finalize before turning our attention to the bowl season. Fortunately, the situations in the power conferences are pretty cut and dried at this point, with just three divisions to figure out and each having an easy path to follow. But things got a little dicier in some of the Group of Five conferences. If you think the ACC Coastal was a mess, wait until you see what’s going on in Conference USA!

The defending national champion Clemson Tigers already secured their spot in the ACC Championship Game by running away with the ACC Atlantic Division this season. Some might even say Clemson clinched the division the second the season kicked off.

The ACC Coastal Division is always fun to monitor as the season progresses, because it seems it’s a division that’s up for grabs every fall. Such was the case once again this season, but the race has been whittled down to just two teams, and they will play next week. Virginia and Virginia Tech will play in a winner-take-all game for the ACC Coastal Divison title. Virginia Tech knocked Pittsburgh out of the running with a shutout of the Panthers in Blacksburg on Saturday. That set the stage for an epic Commonwealth Cup between the Cavaliers and Hokies. After Virginia squandered a chance to upset the Hokies last season, they have been looking forward to a shot at redemption.

There will be no Big 12 championship game drama on the line next weekend. The conference championship has already been locked in with a rematch between Baylor and Oklahoma just a week after the Sooners stunned the Bears in Waco. Each team could arrive in Arlington for their rematch with just one loss each, with Baylor’s lone loss coming at the hands of Oklahoma. And if both teams have just the one loss, then there could be some College Football Playoff implications on the line.

Oklahoma has become a trendy pick as a playoff contender late in the season given their current top 10 ranking and victory at Baylor, but the Bears could make one last case worth considering by getting a win against the only team to beat them. Odds are Oklahoma will have the more legitimate shot at the playoff with a win than Baylor would, but this could be a good one.

The undefeated Buckeyes wrapped up the Big Ten East Division title with a home win against No. 8 Penn State on Saturday, booking their return trip to Indianapolis for the Big Ten Championship Game for the third consecutive season. Who they face will be determined next week when Minnesota hosts Wisconsin in the regular-season finale. The winner of the rivalry game between the Gophers and Badgers will take the Big Ten West Division crown and head to Indianapolis to meet Ohio State.

Minnesota snapped their long losing streak to rival Wisconsin last season, so now PJ Fleck and company look to cap a magical season with another win against Jonathan Taylor and the Badgers. A win by Minnesota would keep their playoff hopes alive as well.

Although Oregon suffered a tough loss to Arizona State on Saturday night, dealing a severe bruise to Oregon’s playoff chances, the Ducks already had the Pac-12 North crown secured. Now they just wait to learn who they will face in Santa Clara. That’s still to be decided and will have to be settled next week by the Utah Utes.

Utah took care of business at Arizona later on Saturday night to remain in control of their fate in the division race. Utah must win its regular-season finale against Colorado to clinch its first Pac-12 South Division title. If Utah does happen to lose at home to the Buffs, then USC will win the division title and move on to face Oregon. USC wrapped up its regular season on Saturday a week earlier than everyone else by beating UCLA. Thanks to a head-to-head tiebreaker with Utah, the Trojans still have a slim shot of playing for the Pac-12 title.

We’re all set in the SEC. Georgia claimed the SEC East crown a week ago with a road win at Auburn and LSU officially seized the SEC West division Saturday with a blowout of Arkansas. All that is left to answer is whether Georgia can beat LSU and open the door to two SEC teams in the College Football Playoff for a second time. Both teams still have one more game to play that will carry significance in the playoff race (LSU vs Texas A&M next week and Georgia taking on rival Georgia Tech), but those results will not alter the SEC Championship Game matchup in Atlanta.

What about that Group of Five?

American: Cincinnati vs. Memphis or Navy

UCF’s reign is officially over in the AAC. Cincinnati finished on top of the AAC East Division this year thanks in part to wins against UCF and Temple, the top two challengers outside of Cincinnati. The Bearcats will play in their first AAC Championship Game and will have a chance to host the game on their campus. If Cincinnati wins next Friday’s game at Memphis, then Cincinnati will host the AAC Championship Game. And there’s a chance it could end up being Memphis.

The AAC West Division could be won by Memphis for a third consecutive season with a win by the Tigers over Cincinnati on Friday. A win by Memphis would also keep the AAC Championship Game in Memphis a week later against the Bearcats. Maybe Cincinnati can get a good hotel deal? But if Memphis does lose at home to Cincinnati, then the door is open for the Navy Midshipmen. Navy would clinch the division with a win at Houston next Saturday if Memphis loses to Cincinnati the day before. Memphis would end up winning the division if Navy loses to Houston.

The AAC is also the conference to watch right now for the New Year’s Six race. Memphis is currently the highest-ranked Group of Five program in the hunt, followed immediately by Cincinnati. SMU fell out of the race with its loss to Navy, but the Mids should re-enter the fray after their win against the No. 25 Mustangs. Memphis or Cincinnati winning each of the next two weeks would likely cement the AAC champion in the New Year’s Six once again. But the conference could also take itself out if Cincinnati and Memphis split the next two weeks. The ultimate disaster for the AAC would be Memphis losing at home to Cincinnati and Navy losing to Houston, and then Memphis beating Cincinnati. That would leave the door open for… Boise State?

The Mountain West Conference title game was locked in late Saturday night with Boise State blowing out Utah State and Hawaii getting by San Diego State on the big island. Boise State topped Hawaii earlier this season in Boise, 59-37, and they will look for another big victory on the blue turf in the conference championship game. Boise State is absolutely in the mix for their return to a big bowl game but will likely need a little help in the AAC in the next couple of weeks.

With one week to spare, the Sun Belt Conference got its two division champions sorted out this weekend. Appalachian State took the East with a win over Texas State, and Louisiana took home the West after their dominant performance against Troy. It will be a rematch between the two programs that met in last year’s inaugural Sun Belt championship game. This year, Appalachian State has a chance to sneak into the New Year’s Six lineup as well, although it would need to beat Louisiana and then get some help from the AAC and Hawaii in the Mountain West Conference. No Sun Belt team has played in a New Year’s Six bowl game, so Appalachian State is looking to make some history.

Conference USA: FAU or Marshall vs. UAB or Louisiana Tech or Southern Miss

The most complicated conference championship game to sort out is in Conference USA. Both divisions are up for the taking next week in a handful of games, so there will be something to pay attention to throughout the conference. Let’s start with the easiest division to figure out, which is the East Division. Simply put, if Lane Kiffin and FAU win next week’s game against Southern Mississippi, the division belongs to the Owls. Of course, Southern Miss still has a reason to win that game too, but we’ll get to that in a minute. If FAU loses, then the Owls would need Marshall to lose its game vs FIU to still secure the division. A pairing of a loss by FAU and a Marshall victory over FIU would send the Thundering Herd to the conference championship game. Marshall owns the head-to-head tiebreaker with FAU, but FAU sits alone in first place of the division going into the final week. Western Kentucky has the same record as Marshall but is already out due to head-to-head losses to both Marshall and FAU this season.

But what about that West Division?

Three teams are 5-2 in conference play; UAB, Louisiana Tech, and Southern Miss. None will play each other in the final game, so there are a handful of scenarios to sort through. In short, any combination with one of those three teams winning and the other two losing will give the winning team the division. It’s probably best to go through this process one team at a time. Let’s begin with UAB.

UAB took care of Louisiana Tech on Saturday with a 20-14 victory, so UAB would own a head-to-head tiebreaker with Louisiana Tech. UAB lost a few weeks ago to Southern Mississippi. So a win by UAB at North Texas and a loss by Southern Miss gives the Blazers the division.

Southern Mississippi would win the division with a win against FAU and a loss by Louisiana Tech to UTSA, because the Bulldogs own the head-to-head tiebreaker with Southern Miss. Southern Miss would then finish in no worse than a tie with UAB, which favors the Golden Eagles.

Lastly, Louisiana Tech can take the division with a win at home against UTSA and a UAB loss at North Texas.

If all three teams win next week (or if all three lose), then the division would go to down the list of three-team tiebreakers. And, well, let’s just hope not all three win or lose in the same week to avoid going down that rabbit hole.