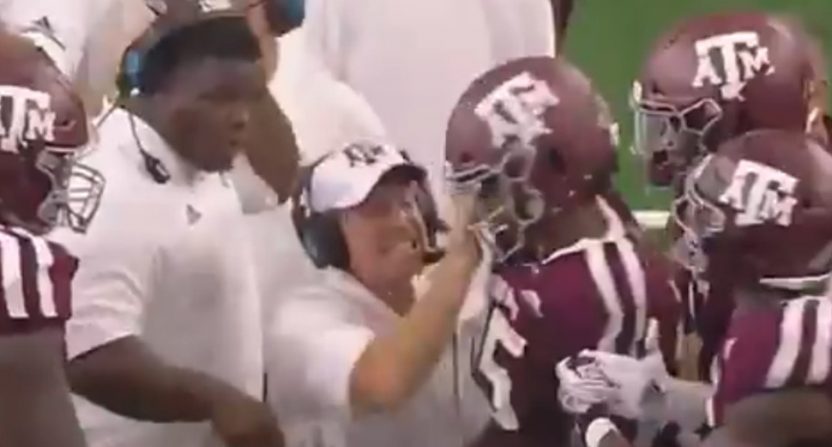 It’s awfully rare to see a NCAA coach physically touch a player, and some of the cases where that has happened have led to controversies and even lost jobs. Texas A&M coach Jimbo Fisher’s actions Saturday against Arkansas probably won’t rise to that latter level, but Fisher certainly created a controversy when he grabbed A&M linebacker Tyrel Dodson’s face mask. That came after Fisher and other A&M coaches ran on the field to stop a developing scrum between the teams in the third quarter of the Aggies’ 24-17 win over the Razorbacks:

This led to plenty of players turned analysts opining that Fisher crossed a line, including former Texas Longhorns’ linebacker and current ESPN/Longhorn Network CFB analyst Emmanuel Acho (who also played in the NFL with the Browns, Giants and Eagles):

If you making 75 million a year and I’m not making no money. Don’t touch me unless you putting money in my pocket. Yell all you want. Don’t put your hands on me

My oline coach in Denver once had a team meeting to tell us if I ever put my hands on you in a game you have the right to whip my ass! True Story https://t.co/Nun7GImFH4

And if the kid did that to the coach,he’d be thrown off the team.

Former USC and NFL quarterback Sean Salisbury, now a host for Houston’s SportsTalk 790, was perhaps a little less strong in his condemnation, but said moves like this will likely lead to a player pushing back someday:

I’m old school and the snowflake society has an answer for everything, just ask em. But, if a player grabbed a coach like Jimbo grabbed a player, the country would lose their collective minds. One day a player is going to right hook a coach, I guarantee it! Then what!

For his part, Fisher said afterwards (around the 6:30 mark) that he was just trying to stop the fight and avoid Dodson being ejected:

“They’re getting in an argument and a fight. I don’t need that guy out there pushing and shoving, getting in a fight in the game. Lose one of our best players on defense and our team leader, that’s great. Learn to put your pride away and go on the sideline. There ain’t no sense to go out there and push and shove and do dumb things out there when you’re locked in on a game. He plays great, he’s a heck of a player for us.

“We’ve had Dodson gone for a game or two. We had that. In a game like that, to lose [number] 25? I was just trying to make a point — I don’t want you out there fighting. Make the play, shut your mouth and go on. And he is a great player. Emotions get in football, it’s an emotional game. But you gotta play intelligently, you gotta play to win. Dodson’s one of our team leaders, that’s a guy we count on for everything, make calls, do everything, man, that guys’s critical.

“And you gotta understand that role, and there’s something bigger than the individual battles that you’re going with. That’s all I was trying to make a point to him.”

And for his part, Dodson tweeted that Fisher did “the right thing”:

I’m in. Coach fisher is an amazing coach, he did the right thing. I let my emotions get the best of me at that certain moment. My teammates and this University needs me. That’s why he was so upset! He’ll have my back no matter what.
AGS WIN 👍🏽

But that doesn’t necessarily end the controversy. As Acho noted, the unequal power dynamic between coaches and players is even higher in college, and even if Dodson was upset about Fisher’s actions here, he might face some backlash for saying that publicly. And while Fisher’s stated intention of breaking up the shoving and stopping a fight and an ejection for Dodson may seem laudable, there are plenty of ways to do that without grabbing a player’s facemask.

Even if Fisher felt the need to make physical contact, it would have seemed possible to do that by just holding Dodson around the shoulders instead of going for the mask. And his lack of apologies afterwards didn’t exactly improve the situation. This wouldn’t be a legal hit in-game, and it shouldn’t be acceptable behavior from a coach either.