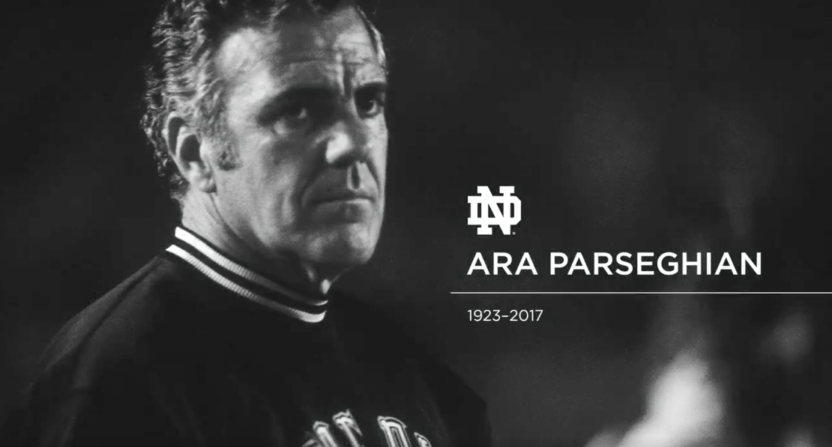 Legendary college football coach Ara Parseghian, who is best known for his success at Notre Dame and Northwestern, died Wednesday morning at the age of 94.

With a career record of 170-58-6, Parseghian remains one of the best coaches in both Northwestern and Notre Dame history. While he is most famous for his time at Notre Dame, his eight years at Northwestern helped catapult him to that job.

Northwestern’s football team struggled throughout much of its history, as the school has historically failed to adequately support the football team. Even when Parseghian was there, Northwestern often had far fewer players than its opponents, and its facilities were lacking, which hurt recruiting. Nevertheless, Parseghian turned Northwestern into a powerhouse. The team achieved its only No. 1 ranking ever in 1962, and it had some stunning results during Parseghian’s tenure: A 4-0 record against Notre Dame, a 3-1 record against Ohio State and a 45-13 win over No. 1 Oklahoma.

Our entire program mourns the loss of one of the pillars of our University, Coach Ara Parseghian. pic.twitter.com/nXS3xyei05

Parseghian is also known in popular culture for being the Notre Dame coach in “Rudy.”

After leaving Notre Dame, Parseghian became a college football commentator and devoted his life to raising money for medical research. The Ara Parseghian Medical Research Foundation raises money to find a cure for Niemann-Pick Disease, which three of his grandchildren have died from.

Even as he left college football professionally, Parseghian lived near South Bend and remained a fan the rest of his life. He told me in 2012, at the age of 88, “Games start at 11 (a.m.) and don’t end until 11 (p.m.) and I’m right there watching them all.”