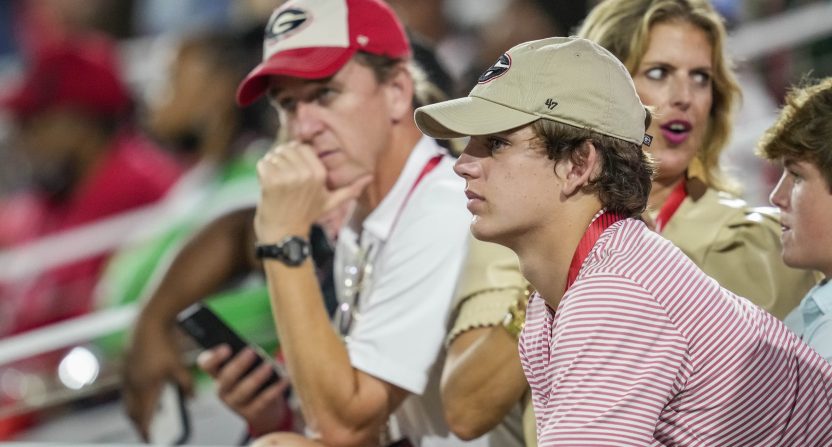 While Peyton and Eli might be the Mannings that everyone knows, there’s a new Manning that everyone is going to want to make sure they’re very aware of. Arch Manning is widely considered the No. 1 recruit in the 2023 class and has been making headlines for months due to being the nephew of two Super Bowl-winning quarterbacks and the heir apparent to the family destiny.

The 6’4″, 215-pound quarterback has thrown for over 5,000 passing yards and over 70 touchdowns in his three-year career with  Isidore Newman. He also recently showed off some uncharacteristic Manning speed on a 68-yard touchdown run. Between the name, the pedigree, and the abilities, it’s no wonder all the major programs are lining up to recruit him.

The high school junior isn’t expected to announce his college football decision until at least next spring, saying that he’s still “wide open” in his thinking. That said, he’s already taken visits to Georgia, Alabama, Ole Miss, Clemson, and Texas, to name a few. The offers keep rolling in and so does the intrigue.

While it’s going to be a while before we know for sure, one recruiting service has announced who they think the frontrunners are to get his commitment. According to On3’s new player database, they are saying that Georgia and Texas are the current leaders to get Arch.

Announcing QB Arch Manning as the first ever profile on the @On3sports Player Database. Arch is ranked the No. 1 recruit in the nation by the On3 Consensus for the class of 2023. https://t.co/nmxHk97rBQ

Right behind those two schools are Alabama, LSU, Clemson, and Ole Miss.

How much should you read into this? Well, that depends on how much you read to any recruiting news or rankings. One thing we seem to know for sure is that the odds are pretty good that Manning is going to end up in the SEC (which includes if he decides to go to Texas). That just seems preordained, doesn’t it?