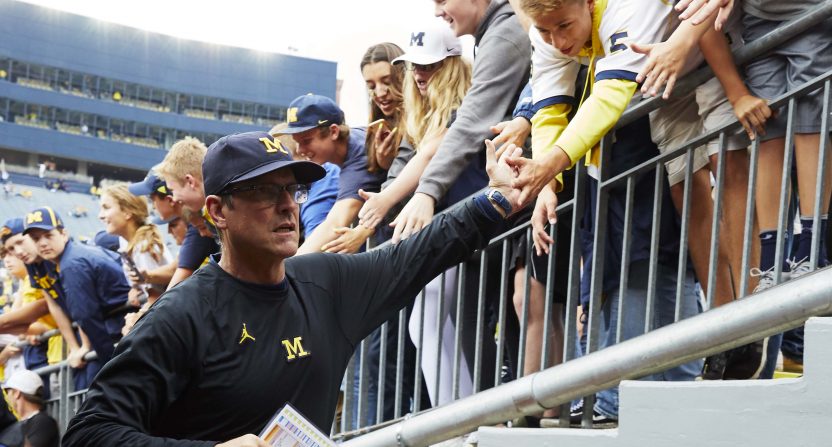 The Ohio State Buckeyes have been at the top of the Big Ten, and more importantly their rivalry with Michigan, since Jim Tressel arrived in Columbus in 2001.

The numbers behind Ohio State’s dominance in the series are truly astounding. Since that year, the Buckeyes have been the preeminent force of college football in the midwest with two national championships and eight Big Ten championships as well as a shockingly one-sided 15-2 record against their arch-rival. Perhaps the most impressive display of Ohio State’s consistent place near the top of the sport since the beginning of the millennium is the fact the Buckeyes have made 13 appearances in major bowl games (BCS pre-2014 or New Year’s Six in the playoff era) since 2001 and just 3 appearances in minor bowl games. That includes each of the last five seasons under Urban Meyer and doesn’t include a 2012 season where Ohio State went undefeated but were ineligible for postseason play.

Comparatively speaking, Michigan has made just five appearances in major bowl games since 2001 and they last won a share of the Big Ten title all the way back in 2004. Let that really sink in for a second, the Michigan Wolverines, the winningest team in college football history, haven’t won a conference title in 14 years. Rich Rodriguez and Brady Hoke were largely to blame for this barren period in Michigan’s proud football history.

But to this point, even beloved alum Jim Harbaugh hasn’t been able to buck these trends. Harbaugh is 0-3 against Ohio State and although his overall record is a much improved 28-11, he still hasn’t delivered any sort of meaningful victory or silverware, except for a Citrus Bowl win in his first season.

Could that finally all be about to change?

Ohio State’s stranglehold over the Big Ten seems like it’s in danger of really slipping away for the first time in years. How could any observer think otherwise after seeing the #2 ranked Buckeyes get smoked by Purdue in primetime on Saturday night to the tune of a 49-20 demolition? It wasn’t just that the Buckeyes got blown out. After all, the same thing happened last year when the Bucks lost by 31 points to Iowa. Last year, though, Ohio State was able to recover. They ran the table, beat Michigan, won the Big Ten, and were probably unlucky to miss out on the College Football Playoff.

There’s a whole different atmosphere around Ohio State this year, though. The cloud that has hung over the program after the Zach Smith controversy has not gone away after Urban Meyer’s three game suspension to start the season. If anything, Meyer’s judgment has continued to be called into question with the spotlight on his other assistant coaches for the team’s on-field performance this year.

The narrative surrounding Ohio State at the moment is that Meyer has hired assistants because of their relationships with him and not because of their qualifications for the job. Much of the scrutiny has fallen on linebackers coach Billy Davis, the best man at Meyer’s wedding, in his first college job with his unit struggling. While the two situations are totally different, it was also Meyer’s personal sense of loyalty to Zach Smith (the grandson of Meyer’s mentor Earle Bruce) that kept him on the Buckeye staff for so long in spite of so many obvious problems.

Meyer is 77-9 at Ohio State, but it just feels like we might be witnessing his career winding down. His handling of the Zach Smith controversy – from his initial denials at Big Ten media day to his repeated botched attempts at an apology – couldn’t have been much worse from an accountability and leadership standpoint. Meyer hasn’t looked the same since he returned. Even Kirk Herbstreit said he has looked emotional and erratic on the sidelines this season.

Ohio State showed up in West Lafayette as a team with a huge advantage in talent, pedigree, and experience. And the Buckeyes were outclassed, outschemed, and outcoached in every facet of the game on Saturday night. The major difference between this Ohio State team and previous ones that have had a hiccup is that there is a combination of on-field and off-field problems that aren’t going away anytime soon. Ohio State is having trouble running the ball (just 3 yards per carry against Purdue), is one of the most penalized teams in the nation (ranking 118th in that category), and is struggling to stop anyone defensively (ranking 70th in total defense, one spot behind Indiana).

If there was ever a season for Michigan to finally pass Ohio State, this would be it. The Wolverines have the top defense in the country and Shea Patterson is making enough plays to win games at quarterback. After losing the season opener to Notre Dame, Michigan has climbed all the way to #5 in the polls. While Ohio State was getting blown out on Saturday, Harbaugh scored an important win on the road over Michigan State, another rival against whom the Wolverines have struggled (2-8 in their previous 10 games).

The Wolverines face another test against Penn State this weekend, but assuming they get past that game, they will play Rutgers and Indiana before the season finale against Ohio State. The door is wide open for the Wolverines to finally reach their first Big Ten title game and maybe even their first playoff. They are the clear favorites to win the conference with just a month to go.

As it always does though, it will come down to Michigan-Ohio State. But this year’s game will carry  added significance because it could be about more than just this season. If Harbaugh is unable to once again lead his team past that hurdle, Wolverines fans might rightly wonder when they’ll ever be able to consistently beat Ohio State again.

But if he is able to finally lead his team past Meyer, with all the issues happening in Columbus, it could represent a changing of the guard at the top of the Big Ten. The first one in a long, long time.