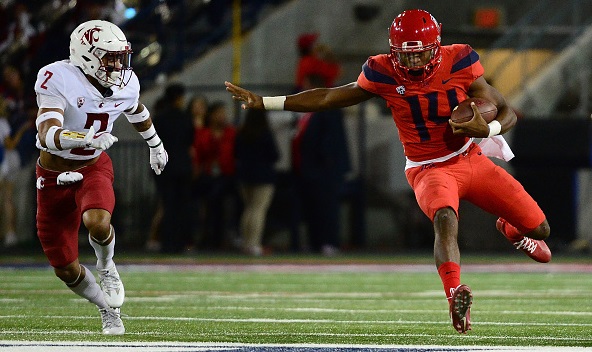 You’ve probably seen Khalil Tate’s rampage over the Pac-12 in the last four weeks. The Arizona Wildcats quarterback came in off the bench against Colorado and accounted for 481 yards and five touchdowns in a win.

Tate, a sophomore, has taken the country by storm while flying past Pac-12 defenses. He’s racking up yardage with brutal efficiency (13.42 yards per carry, 11.7 yards per pass attempt) and has turned the Wildcats’ offense into a juggernaut. Since he took the reins, Arizona has averaged nearly 49 points per game.

The Wildcats are 6-2 with two single-digit losses. They’re currently No. 22 in the College Football Playoff rankings, and have a chance to jump up more (and into the Pac-12 South driver’s seat) with a win over USC this weekend. Beyond the Trojans, UA’s three remaining opponents — Oregon State, Oregon, Arizona State — are all .500 or worse.

But chalking all of the team’s success up to Tate alone is also foolish. Yes, he’s quickly become the most dangerous offensive weapon in college football. However, players don’t just do that on their own. Look to Lamar Jackson, the last player to own that title, for what happens when the team around you collapses. Jackson’s still putting up otherworldly numbers this year. And yet, Louisville isn’t winning games at the same clip at all.

Arizona is, clearly. Here are the key reasons for that, beyond “just” Tate:

Arizona’s defense is certainly not stopping a lot of teams, having allowed 30 points or more for five straight games. That said, individual players are making big plays and making the difference in close games.

Freshman linebacker Tony Fields II leads the team in tackles with 46.5, and fellow frosh Lorenzo Burns has become a dangerous corner to throw toward, with three interceptions this year. The Wildcats aren’t an amazing pass-rushing team, but they’ve gotten a push up front. With 18 sacks on the season, Arizona’s tied for 50th in the country. Half of those have come from freshmen Fields (three) and Kylna Wilborn (six).

Big plays help push an effective offense along, and that ability has also helped Arizona start hot — with and without Tate. According to Bill Connelly’s numbers, the Wildcats are ranked 16th in the S&P+ for the first quarter. More importantly, the offense doesn’t really dip much either. They’re 20th in the second quarter and 24th in the third. The lone dip, 39th in the fourth quarter, is fine — especially when contextualized against the other quarters.

Again, while Arizona is strong on every down, they’re especially good as a series progresses. The Wildcats start 33rd on first down, but then shoot up to seventh in terms of effectiveness on second. Third down’s also top 25 as well.

Arizona doesn’t necessarily need third down conversions to put up points (they only had 13 first downs last week while scoring 58 points). But when faced with third downs (spots where they need to convert into firsts), they’re among the country’s best there too.

The Wildcats’ offensive line has allowed just five sacks this year — one of the lowest figures in college football. Sure, some of that is assisted by Tate’s mobility, but the group’s been able to open running lanes for other players as well. J.J. Taylor has 533 yards from the running back spot, and Zach Green and Nick Wilson both have more than 275 on the ground. Every one of Arizona’s top seven rushers this year averages at least five yards per carry. They’re bruising teams in the trenches. That’s something potentially set up by Tate, but it still requires his teammates to deliver (and they have).

Tate and Arizona were not expected to accomplish much this season, but with one of the country’s top offenses at this point — and some help on the defensive end, too — they’ve morphed into a Pac-12 contender. Allowing more than 30 points per game isn’t going to carry any team to the College Football Playoff, but given the state of the Pac-12 this year, it may be enough to win the league.

Even falling short of that ceiling, that’s more than enough to secure Rich Rodriguez’s job at this point. And with a young team, and the electrifying Tate, he’s suddenly gone from hot seat to firmly entrenched with the Wildcats for the coming years.