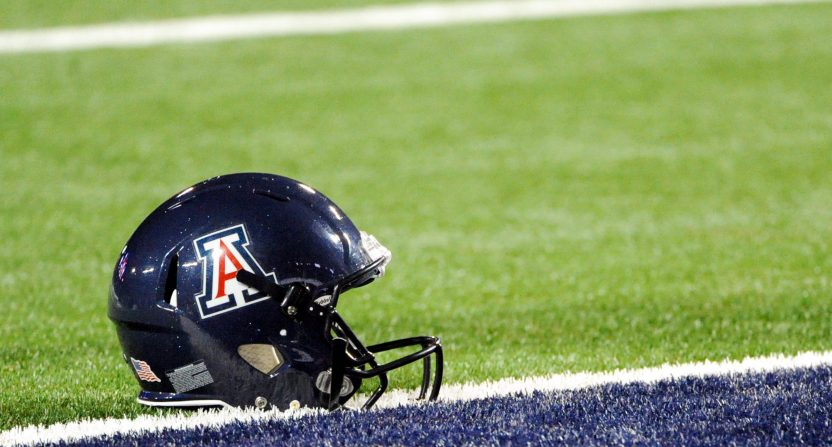 With a month left until the college football season is supposed to begin, the season is hanging on by a thread. Some of the top conferences are canceling non-conference games while some schools canceled voluntary workouts and the Ivy League moved fall sports to the spring.

The University of Arizona made workouts voluntary and stressed that those sitting out for COVID-19 reasons wouldn’t be affected on the team. As a result, the school suspended and reduced the scholarship of offensive lineman Edgar Burrola for violating COVID-19 protocols.

According to the Arizona Daily Star, Burrola has resisted following protocols such as wearing a mask or maintaining social distancing. The redshirt junior tweeted things like (now deleted) “COVID-19 is fake” and “Open up the country!” but at the same time, also openly criticized the nature of “mandatory” workouts and how that isn’t forcing people to play football. Head coach Kevin Sumlin didn’t mention Burrola by name (Burrola revealed he was suspended) but talked about those on the team, where three players have already tested positive for COVID-19, who don’t feel mask and social distancing protocols should be enforced.

“It’s my job to protect and uphold that protocol for everybody else that’s involved in this organization — players, coaches, administrators, medical (personnel). You’ve got coaches’ families.”

“If you’re not gonna pay attention to the protocol, wear a mask, all that other stuff, we just can’t have you around.”

Sumlin revealed that he’s fine with people who have a viewpoint that people that there should be fewer protocols in place, but it doesn’t change the protocols Arizona has in place to try and make things as safe as possible.

Sumlin said Tuesday that it’s “fine to have that stance” about the virus.

“But if that’s what you believe, and you’re not gonna adhere to the protocol, I am ultimately responsible for a lot of other people based on that,” he said.

What Sumlin is trying to do to keep things in control is not just about the student athletes, who for the large part will likely recover, but about everyone else who comes into contact with the team. Young, old, people with preexisting conditions that makes them” high risk;” it’s one thing to protect yourself but that’s only half the battle. When others don’t do it, then innocent people remain at risk and now we’re in a situation where there’s a possibility the college football season could be in danger. Which is something none of us want but might be the unfortunate necessity a month from now.

Now currently suspended, Burrola is advertising work through his business, Las Vegas Roofing, to supplement what was reduced in his scholarship as well as his meal plan and stipend that was lost as a result.