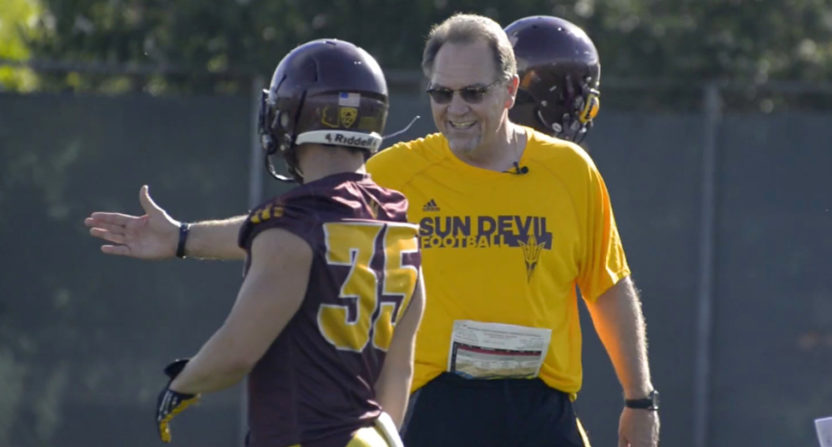 Much of the discussion around ESPN NFL analyst Herm Edwards taking over the Arizona State job was about him keeping the assistant coaches who were there under previous head coach Todd Graham, but now, one of those top assistants is leaving. That would be defensive coordinator Phil Bennett (seen above), who’s leaving for “family reasons” (but that might include another school, like his alma mater of Texas A&M). Here’s Edwards’ statement on the move, via Zach Barnett at College Football Talk:

“While I would have liked for Defensive Coordinator Phil Bennett to remain on the coaching staff, I do appreciate the fact that he has chosen not to stay based upon family reasons,” said Edwards. “Family always comes first and right now he needs to turn his attention to that.  My top priorities right now going forward are to solidify our recruiting class and to assemble a defensive coaching staff.  Both objectives are moving along quite well.”

This definitely seems like something Arizona State wasn’t planning on. And while the school absolutely has the resources to hire another decent defensive coordinator, that isn’t necessarily going to be a smooth process. Edwards hasn’t coached in college since a 1987-89 stint as San Jose State’s defensive backs coach, so it’s not necessarily like he’s particularly up on strong assistants in the college ranks. (Or even on which offenses have been working well in the Pac-12 in recent years.) And the Sun Devils’ “New Leadership Model” leaves a whole lot of questions about who’s actually in charge.

Of course, considering that the 7-5 Sun Devils were ranked 90th in FBS with 31.2 points allowed per game this season, plus 103rd with 447.2 yards allowed per game, it’s not like Bennett was lighting opponents up. And it’s quite possible that things might actually get better under his replacement. But this is still a bit of a surprise for Arizona State, and a bit of proof that everything isn’t necessarily going to go smoothly in the transition from Graham to Edwards as head coach. We’ll see who the Sun Devils get to replace Bennett and how that affects their defensive recruiting. But for now, this appears to be another warning sign that the shift to Edwards may not go as smoothly as the administration anticipated.