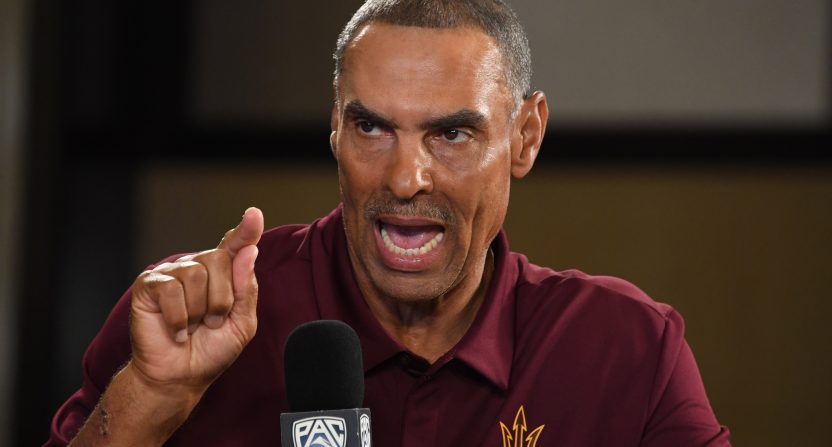 The man from ESPN who occasionally speaks like your crazy uncle is now running a major conference football program. He contributed to this perception by, at times, sounding like a loon.

Edwards will win you the press conference, but can he win games? Arizona State was picked to finish last by the media in the Pac 12’s South Division in the conference’s preseason poll. Its 72 points in the poll were the second-fewest, trailing only Oregon State.

In response, Edwards turned to greatest skill: talking. He’s like the Pac 12 version of Jimmy “The Mouth of the South” Hart. Just hand him a bullhorn. Or at least point him in the right direction of the camera.

“We don’t go by polls. We’ve got our own aspirations,” Edwards said. “I told you at the press conference, we’re trying to win a Pac-12 Championship. So whatever people write, they can write what they want. That’s good. Hopefully no players are listening to.”

Communication has value in college sports, more so than in the professional ranks. In college, when you address the media, you’re not just talking to reporters. You’re speaking to boosters who cut the checks and high school recruits who are the talent. You have to be able to exude confident. You have to, as they say in politics, rally the base.

Tough talk, however, is only one aspect of the job. You have to win and there are serious doubts on whether Edwards can do so at Arizona State. Forget about a grace period. Three writers for Athlon.com say that Edwards is already on the hottest seat of any Pac 12 coach.

Edwards’ biggest selling point is his personality. It has to be because it’s not going to be his coaching record. In the NFL, Edwards’ career can be explained in two parts. He was mediocre in five seasons with the New York Jets, going 39-41 with three playoff appearances and a 2-3 postseason record. His stint with New York might have been better if not for various injuries to quarterback Chad Pennington.

At Kansas City, Edwards went 9-7 with a playoff loss in his first season in 2006. It was downhill after that, going 4-12 and 2-14 in his final two seasons. Edwards is best known for running Larry Johnson into the ground. Johnson, one of the most physical gifted backs in NFL history, carried the ball an astounding 416 times in 2006. Johnson’s career, obviously, was never the same after that.

At least Johnson could make fun of Edwards.

If you fail twice in the NFL, your head coaching career is over. Edwards went to work for ESPN where his mouth was an asset. He could talk a good game. Say football things in an authoritative football voice. He had a presence. He looked good on TV. He sounded great.

TV can do wonders for your image. It adds legitimacy to your opinions regardless of what your actual credentials are. When you’re a talking head at ESPN, you can give hot takes without having to worry about the repercussions of being wrong. You seem so smart. Still, there wasn’t anyone banging down the door to hire Herm. But when his former agent became the Arizona State athletic director, guess who became a must-have?

Herm Edwards is the most qualified man to lead the Sun Devils even though he hasn’t coached at a college campus since 1989? It would be one thing if a mid-major looking to make a splash hired Edwards. That makes sense. But when a Power Five school did it, that raised eyebrows and skepticism.

A guy who doesn’t know the school’s nickname, is still learning the rules, has threatened to cut players, and is wholly unfamiliar with modern recruiting is going to lead your team to the Pac 12 championship? That doesn’t just sound aspirational. It seems ludicrous. But perhaps we need to give Edwards the benefit of the doubt. Maybe his magnetic personality will be enough.

Edwards’ first recruiting class was ranked as high as No.5 in the Pac 12, 36th overall in the nation. The Sun Devils have only 11 returning starters, but eight are on offense. That includes quarterback Manny Wilkins (20 TDs, 8 INTs), and wide receivers N’Keal Harry (82 catches, 1142 yards 8 TDs) and Kyle Williams (66 catches, 763 yards, seven TDs). But there are questions about the offensive line and a defense that was among one of the worst in the league against the pass.

The best case scenario is that Edwards is Pete Carroll 2.0. Carroll’s hire at USC was mocked. He too had been away from the college game for several years. Carroll built a two time national champion – although it came with baggage. It also bears noting that Carroll’s record in the NFL prior to going to USC was 33-31.

The worst-case scenario is that Edwards is Lovie Smith 2.0. Smith coached the Chicago Bears to the Super Bowl and had an 89-87 NFL record. He took the University of Illinois job in 2016 after being away from college since 1995. So far, his record at Illinois is 5-19. He’s one more losing season away from being fired. Smith also is as exciting as plain toast for breakfast.

Edwards’ mouth and charm might be able to buy him time. But a wise man once said: “A goal without a plan is a wish.”

That man was Edwards. His plan better be great, because all of his talk sounds like wishful thinking.