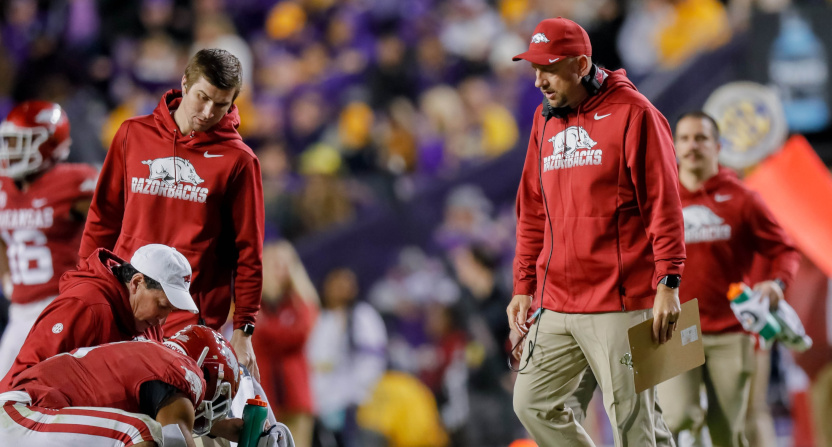 The Arkansas Razorbacks have faced a whole lot of challenges this year, from a 2-9 record (including a home loss to San Jose State, and wins over just Portland State and Colorado State) to the firing of head coach Chad Morris (after a 4-18 overall record in one and a half seasons) to quarterback injuries that have them set to start Jack Lindsey, the school-record fifth different QB they’re starting this season. And now, there’s yet another one still ahead of their game against the Missouri Tigers Friday (2:30 p.m. Eastern, CBS). The Razorbacks are now battling…the mumps. Here’s more on that via John Nabors of radio station ESPN Arkansas:

Could be around 15 or so Razorback players and a few coaches out today with the mumps.

A tweet I never thought I’d ever send but here we are.

Update: The Athletic’s Kelli Stacey reports that 13 Arkansas players are out for the game, with no breakdown of how many are missing it thanks to mumps.

Thirteen players are out for Arkansas today for a number of reasons (season-ending surgery, concussion protocol, previous injuries). The team has not confirmed how many, if any, are out with mumps

As Tom Murphy of The Arkansas Democrat-Gazette wrote Tuesday, there’s a campus outbreak of mumps at the school, and some student-athletes had confirmed cases of mumps:

After an outbreak that has led to nine confirmed cases of the contagious disease on the UA campus, according to the Arkansas Department of Health, all coaches, players and staff in all sports had access to MMR (mumps, measles and rubella) vaccines made available at the Smith Football Center on Monday.

“Two student-athletes have been diagnosed with the mumps and they have been at the Jones Center recently. A few staff members in athletic training have also been quarantined. To be safe, we strongly recommend that everyone get the vaccine.”

There’s not much information yet on which players and coaches are infected, but that’s certainly going to be another hurdle for the Razorbacks to climb ahead of their game with the Tigers, who are 5-6 on the season and need a win for bowl eligibility. That piece also includes interim head coach Barry Lunney Jr. (seen above checking on an injured player during Arkansas’ game with LSU last week) saying “Our care and the health of our players and our staff is always at a premium and it will continue to be that way, but I’m just going to continue to coach football and get our guys ready to play football on Friday.” But it now seems that a bunch of those guys aren’t going to be ready.

This isn’t the first case of mumps in sports, as the disease has hit several NHL teams (including the Minnesota Wild, Vancouver Canucks and Pittsburgh Penguins) in recent years. But it’s still definitely an unusual situation. And it presents yet another challenge for Arkansas in this game.