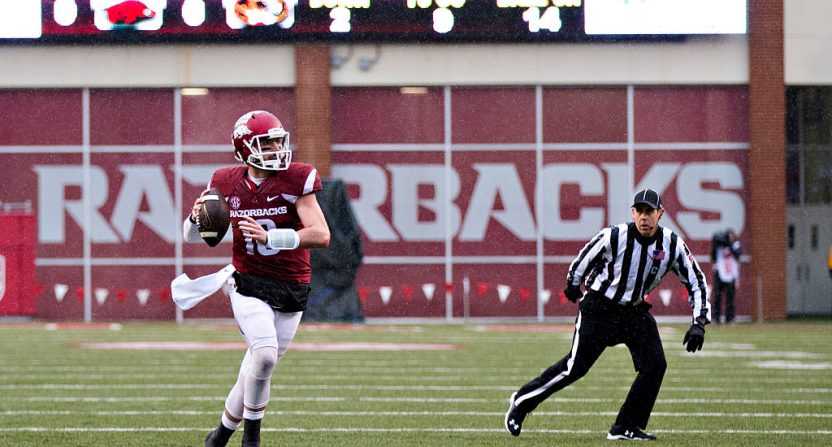 If a new law in Arkansas to allow guns at sporting events stands, Razorbacks officials fear their SEC membership could be in jeopardy, according to sportscaster Bo Mattingly.

“If this bill is left as-is, I’m not sure Arkansas would be a member of the SEC anymore,” Mattingly told representative Charlie Collins on his Tuesday talk show “SportsTalk With Bo.”

UA sources fear If law ends up allowing guns in stadiums it could be end of their SEC membership. We'll discuss w/ @CollinsARK at 2pm cst.

Last week, Arkansas governor Asa Hutchinson signed House Bill 1249 to allow concealed handguns into Razorback Stadium and Bud Walton Arena, among other publicly funded buildings throughout the state, even if those buildings have a no-weapons policy, as long as the gun owners complete an additional eight-hour training designed by the state police. The law technically goes into effect Sept. 1. However, because state police have until January to design a training program, it would likely take until then to practically go into effect.

It didn’t take long for the state Senate to double back and vote one day later to exempt college sporting events from the new law. However, the Arkansas House has not passed the amendment.

On SportsTalk With Bo, Collins, who sponsored the bill, said its purpose is to protect those living on college campuses from school shooters. He also said those who supported the bill do not want to jeopardize Arkansas’ status with the SEC or NCAA.

“I’m very optimistic we’ll be able to come up with a solution that can give us confidence that we’re not going to put ourselves in jeopardy somehow with the NCAA making some kind of ruling against Arkansas that would penalize our sports programs. Nobody has discovered anything in the NCAA rules to this point that would suggest anything in (the bill) conflicts with NCAA rulings.

“I understand we’re breaking new ground in general with (the bill); I understand a subject like guns or snakes or spiders is very emotional, but I am optimistic we’ll be able to balance this so that we can move forward and not risk some kind of a conflict with our sports programs that no one expects to do.”

Also on Tuesday, SEC commissioner Greg Sankey released a statement mostly using a lot of words to say very little. But if you read between the lines you can see why Arkansas is worried.

“The University of Arkansas is a valued member of the Southeastern Conference and has a long history of working with public safety officials to provide a safe environment for intercollegiate athletic competition.

It is our desire to see athletic events and sports venues exempted from HB 1249.

Given the intense atmosphere surrounding athletic events, adding weapons increases safety concerns and could negatively impact the intercollegiate athletics program at the University of Arkansas in several ways, including scheduling, officiating, recruiting and attendance.

HB 1249 creates concern for the Southeastern Conference and its member institutions. It remains our collective desire to provide a safe environment for student-athletes, coaches, officials and fans, and will continue to closely monitor the status of this legislation.”

So Sankey does not outright say or even imply that the SEC would kick Arkansas out of the conference. But he clearly voiced the league’s opposition to the bill.

Without question, at the very least there will be a lot of added tension if the amendment does not pass.