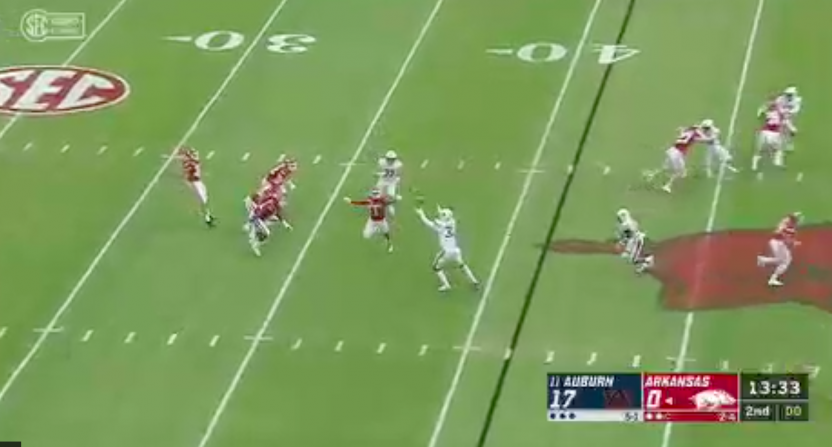 You gotta hand it to the Arkansas Razorbacks. As so many of their SEC rivals grab headlines for their on-the-field dominance, they find ways to break through the clutter and grab some attention of their own, even if that attention is for really dumb things.

The Chad Morris Era hasn’t been going great in Fayetteville so far. Morris came into Saturday with a 4-14 overall record (including a 2-10 finish in 2018) and all signs pointed to the Razorbacks losing against No. 11 Auburn even though they’re at home. Given that they were a three-touchdown underdog, you might expect Arkansas to break out some tricks in order to gain any kind of advantage they could.

Already down 17-0 in the second quarter, they decided it was now or never for one of those tricks. Arkansas lined up to punt and kicker Sam Loy took the snap as you’d expect. However, instead of punting, he stepped forward and heaved a shovel pass over his blockers and towards an Arkansas player crossing the field. Alas, he misjudged the trajectory and ended up throwing the ball well out of the reach of his own player and right into the waiting arms of Auburn’s Chandler Wooten.

“I’m not even sure what they were trying to accomplish here.”

That “push-pass” was, uh…almost impressive in its badness. And Twitter was impressed.

The most Arkansas moment of Arkansas' season. https://t.co/aldnqspHDJ

Arkansas’ punter ran a fake punt and thought he was playing basketball pic.twitter.com/iPF2JCgksB

The silver lining for Loy and Arkansas is that it probably wouldn’t have been a first down anyway as the player he was trying to throw to would have almost certainly been tackled right away. So either way, the result was probably effectively the same.