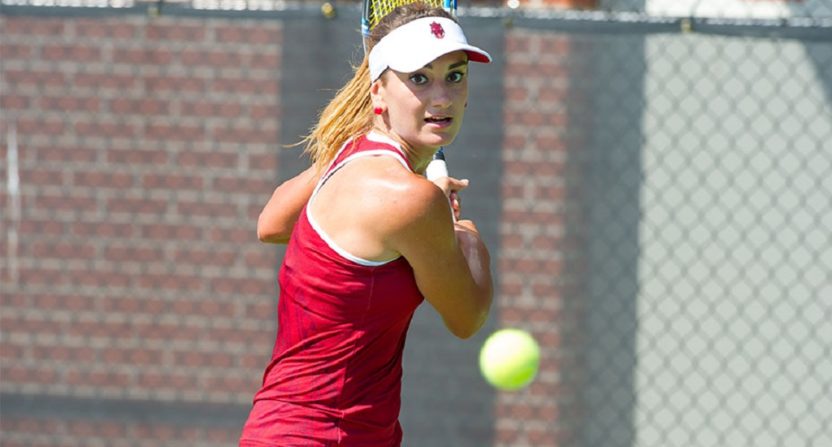 The NCAA as an institution has some rules and regulations that cause one to scratch their head and furrow their brow. (See the infamous “cream cheese on a bagel” violation.) But the intricacies of recruiting and eligibility requirements pales in comparison to what the Arkansas women’s tennis program was able to accomplish over the weekend.

In college football, we know that a team becomes bowl-eligible when they reach six wins on the season. In tennis, a team has to be .500 or better over the course of the season to qualify for the NCAA Tournament. In order to achieve that record, the Arkansas women’s tennis program traveled to Nashville, Tennessee to play against Tennessee State after they were eliminated from the SEC Tournament.

They didn’t just play one match, though. Not two, either. Not three. Not four. Not even five. Arkansas played Tennessee State in SIX CONSECUTIVE MATCHES on Saturday, winning all six of them to bring their record to 16-16 and tournament eligibility.

The primary reason Arkansas scheduled this unreasonable day of tennis was their incredible run of matches toward the end of the season. They finished the regular season an unimpressive 7-15, with a 3-10 mark in conference. However, this may not be as bad as it seems; they play in the SEC Conference, which boasts five of the top ten ranked teams in the country. They entered the postseason SEC tournament as the #11 seed out of 14 teams. Arkansas also finished the regular season strong, defeating #35 Tennessee in their final match.

They proceeded to play by far their best tennis of the season at this point, winning three consecutive matches en route to the semifinal. The road to the semifinal included victories over #19 ranked Auburn and #7 ranked South Carolina. In the semifinal, they were able to put up a decent fight against #9 Florida, though they did not come out on top. Similar to the NCAA basketball tournament, the selection committee (at least unofficially) tends to have recency bias, with an emphasis on postseason tournament play. Arkansas likely felt that with these impressive wins to finish off their year, they would have a legitimate shot to play in the NCAA tournament. However, they still were only 10-16 on the season, and needed to get to .500 by Sunday, April 22nd, the last day of the season.

To some extent, it makes sense why Arkansas would take this kind of gamble. Like any sport, your conference affiliation matters. If you play in a top conference, you can have a not-so-impressive record during the regular season and still be considered one of the best teams in the country. Every time Syracuse is a #11 seed in the NCAA Tournament, they always seem to reach at least the Sweet 16, right? But this is taking it to the extreme.

To make this situation even more insane, Arkansas forbids its athletic programs from playing on the road in-state — because if there’s one cardinal sin in college athletics, it’s doing anything that may even remotely benefit a smaller in-state school. Therefore, to find a school to agree to this arrangement, the Razorback team had to travel the 500 miles to Nashville.

What’s in it for Tennessee State, you ask? What’s always in it when smaller schools agree to play larger schools knowing that they’re at a competitive disadvantage: money! Sure, maybe it’s not the $1.35 million that Arkansas paid to New Mexico State to play a football game in 2017, but it was probably a healthy chunk of change.

Sports such as college football and basketball bring huge revenues to universities, but smaller sports like tennis rarely charge for admission and generally operate at a loss. Tennessee State could have had a struggling program financially, and was offered a significant amount of money from Arkansas. This is not illegal, as large schools pay small schools to play them often in many different sports. It would also be a win-win for the schools, as Tennessee State’s women’s tennis program will be well funded, and Arkansas not only has a chance to make the tournament they believe they deserve, but will also make additional money from their postseason play. If money was the reason for this match-up, it makes sense from both sides and follows NCAA rules, though it may not be the right thing to do.

College Tennis Today did a Q&A with the coach and athletic director that confirmed the program was compensated for the schedule and that the Tennessee State team agreed to the matches. They affirmed that the experience of playing that many matches against an SEC school was a great opportunity to play against better competition.

Arkansas is happy. Tennessee State seems to be happy. But this situation still crystalizes pretty much everything wrong with the NCAA. It’s hard for an outside observer to feel good about this situation. Arkansas’ .500 record has the biggest asterisk possible. And even though the athletes agreed to it, playing that grueling schedule has to be taxing, especially considering that these aren’t highly paid professionals.

The whole situation should make a mockery of what college athletics is supposed to be about, but that’s just a day’s work for the NCAA.