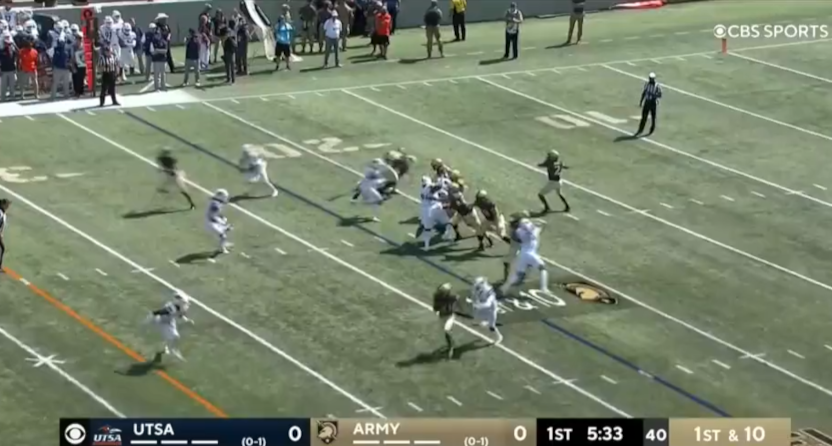 The triple option offense used by teams like the Army Black Knights doesn’t usually lead to a lot of passing. But if teams cheat too much to stop the run game, there’s the potential for big pass plays if a triple option team can execute them. And the Black Knights did just that Saturday against the University of Texas at San Antonio Roadrunners:

This one saw running back Ay’Juan Marshall run a go route and completely blow by a pair of Roadrunners’ defenders, one up on the line with him and one dropped in coverage. Quarterback Tyhier Tyler made a great throw to hit Marshall in full stride, and Marshall also got a key downfield block from a teammate. But this was just a beautifully-executed play. And, as Matt Brown of The Athletic noted, it put Army this season ahead of where they were all last year in terms of long passes:

Army had two such passes all last season

In 2021, the Black Knights went 9-4 and averaged 32.8 points and 375.5 yards per game, but the vast majority of that production was on the ground. Per game, they averaged 280.6 rushing yards and just 94.8 passing yards. And Tyler’s seven pass attempts (which led to three completions for 79 yards and one touchdown with one interception) were the fourth-most on the team; he saw action in 11 games, and rushed for 486 yards (second on the team) and seven touchdowns, but senior Christian Anderson did most of the passing, completing 31 of 63 attempts for 713 yards and five touchdowns with no interceptions.

With Anderson gone though, Tyler is now handling more of the passing for Army. And he completed a 54-yard touchdown pass in a 38-28 loss to the Coastal Carolina Chanticleers last week. (That was his only completion on three attempts in that game, though, and one of those other attempts was intercepted.)  He’s not the only passer they have, though, as fellow senior QB Cade Ballard (who only attempted two passes last year, completing none) completed three of five attempts last week (including a 73-yard TD pass) for 88 yards, and he’s actually put up more passing yards so far against UTSA as well, completing all three of his attempts (through 10:00 of the second quarter) for 88 yards. So between the two of them, the Black Knights certainly have the ability to hurt teams through the air if the defenses focus too much on the run.