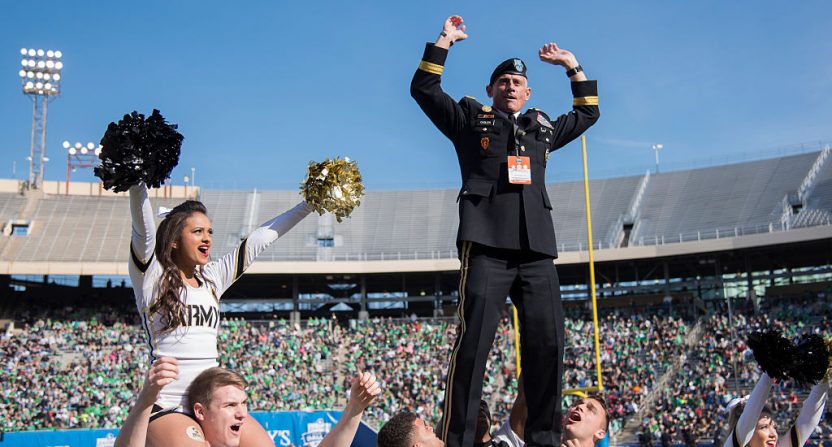 One of the most bizarre scandals seen in recent memory in college football continues to unravel as the consequences for involvement in it are hashed out. Army’s football program has suspended and fined defensive coordinator Jay Bateman for his role in “mishandling information about the Wake Forest football program.”

That’s just a nice way of saying he accepted insider information to gain an advantage that spits in the face of good sportsmanship.

In a statement released today, Army announced the findings of its own investigation to any alleged connection to the Wake Forest scandal, affectionally referred to as WakeyLeaks, and concluded Bateman and former assistant Ray McCartney had been able to get their hands on Wake Forest football information from Elrod and went out of their way to ensure nobody found out about it.

Bateman was fined $25,000 by the academy and suspended from all football activities for two weeks. He will also be required to enroll in an ethics training program. You may ask what the big deal about a two week suspension now is in the offseason, but Army’s spring practices tend to get started earlier than other programs, and this will keep him from participating in any recruiting efforts. It’s also just a bad look to be suspended for such a reason in general.

“Our commitment is to foster a culture of excellence and winning in everything we do,” USMA superintendent Lt. Gen. Robert L. Caslen, Jr. said in a released statement. “It does not mean that we win at all costs. Rather, it means winning in accordance with our values and who we are as an institution and a nation. When we win, we will do so honorably, remaining true to the values and standards that define us.”

Former Wake Forest radio announcer Tommy Elrod was found to be providing crucial information about Wake Forest’s game plans to opposing programs in a recent internal investigation that followed suspicions from a game against Louisville last fall. It was learned multiple programs had benefitted from Elrod’s insider tips, including ACC opponents Louisville and Virginia Tech. Both ACC schools were fined $25,000 by the conference and former Virgina Tech assistant Shane Beamer was fined an additional $25,000.

It is worth noting nobody has committed a violation of NCAA rules at any of these programs, but don’t forget that saying hello to a recruit on your campus for an unofficial visit may be dealt with accordingly by the NCAA’s infractions office.