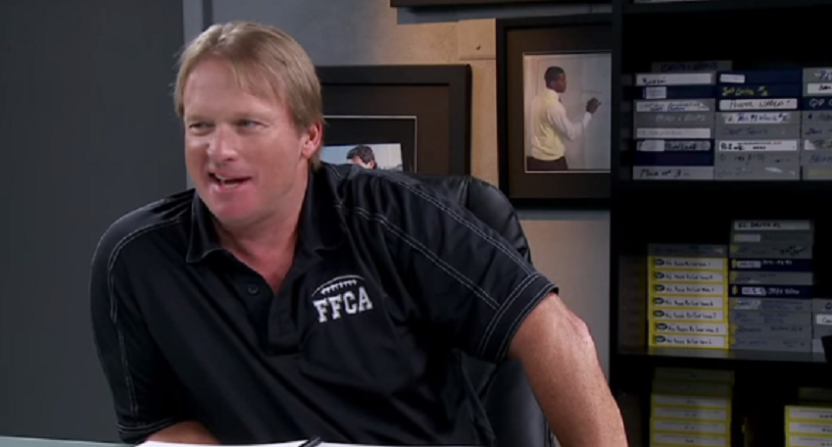 On Sunday, Butch Jones was officially let go as head coach of the Tennessee Volunteers. It was a long time coming, but fans of the Vols have been dreaming of the possibility of hiring Jon Gruden to be the next head coach of their beloved program in Knoxville for a few years now.

Now that the time has come to land a new head coach, it is just about time for those same Tennessee fans to be incredibly disappointed in thinking Jon Gruden is coming to Tennessee. Tennessee is not going to be hiring Gruden. In fact, don’t count on any college football program being able to lure Gruden back to coaching should he ever decide his time in the Monday Night Football booth has come to a close.

Gruden is either the highest-paid or among the highest-paid on-air talents employed by ESPN. It has been estimated he is being paid $6.5 million to be ESPN’s lead football analyst for Monday Night Football, and he also has his own series of shows leading up to the NFL Draft. In short, he’s got a pretty good job at ESPN.

.@richarddeitsch @Timhedus In a word, Gruden. $6.5 Million — give or take a few pennies.

Gruden, who has not coached a game since 2008 with the Tampa Bay Buccaneers, has not exactly slammed the door shut on a potential return to coaching. And that has only led to him being seen by fans of multiple fan bases in the NFL and college that Gruden could be the golden ticket. But if Gruden is going to come back, he’s not going to take just any job, right?

In an interview with Scott Reynolds of Pewter Report over the summer, Gruden admitted he has spoken to some people about a possible return to coaching. Essentially, he’s lighting the flame for his own rumor mill.

“I’ve met with several people – I won’t deny that,” Gruden said to Reynolds. “People – just about every year I talk about coming back to coach. I’m not in here every day at 4:30 or 4:00 in the morning watching pinball. You know? I’m preparing myself to come back. I am. Every day. I’m preparing to come back.”

That answer alone has fans salivating. But when he says he is preparing to come back, what would it take for him to actually dip his toes back in the coaching waters?

We have been down this road before with a former Super Bowl-winning coach who has settled in as a TV analyst. The story of Bill Cowher could tell us just how this will all ultimately play out for Gruden.

Like Gruden, Cowher won a Super Bowl and landed a good TV job talking about football when his coaching days came to an end. For years, Cowher would be attached to a number of coaching rumors, both for NFL and college jobs. The idea of Cowher having a kid going to NC State had NC State fans excited about the future of their program, for instance. The years went by and Cowher remained comfortable in front of the TV camera in the CBS studio. He found peace in his post-coaching career and eventually the thought of him returning to coach slowed down. But it may not have been until Gruden came along for the Cowher rumors to officially go into retirement.

The one key difference between Cowher and Gruden is Cowher stepped into retirement on his own to spend more time with his family. Gruden was fired by the Bucs. That kind of an end to a coaching career can sit with you in an unpleasant way, so it is easy to understand why Gruden may feel the itch to coach again. But again, he is not going to come back just to coach anywhere. He has the clout to hand pick the job he wants. But would Tennessee be a realistic option?

Probably not. Considering Gruden could potentially have almost any NFL job he wanted, even if he had to wait for it to come open, there is very little chance Gruden would give up his comfy job with ESPN and Monday Night Football and days off to spend on the golf course and record commercials for Hooters when the alternative is grinding on the recruiting trail trying to convince high schoolers to come play for you.

That doesn’t seem like something that would sound all that enticing to Gruden. Not at this point in time anyway. He may have the desire to get back into coaching, but he is under contract with ESPN for a few more years. That gives him time to sit back and monitor the coaching scene and pinpoint the best possible job for him.

And in the end, he may just end up seeing ESPN as the best job for him anyway.