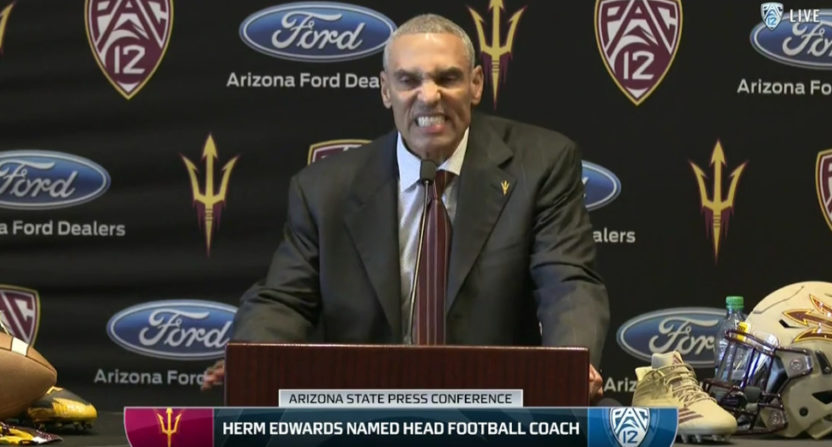 One of the reasons Arizona State made the off-the-map decision to hire Herm Edwards to be their next head coach was because they felt the staff in place around him was fine but needed a new leader. It appears that plan is backfiring already with the reported loss of another coordinator to another job.

Offensive coordinator Billy Napier is expected to be named the next head coach at Louisiana-Lafayette, filling one of the last remaining vacancies in college football’s annual coaching carousel.

According to a report from Football Scoop, Napier is not the only assistant on the Arizona State coaching staff to entertain overtures from other programs. Although names of other assistants potentially ready to head out of Tempe are not reported, that seems to make sense given the coaching change. After Arizona State head coach fired Todd Graham, assistants taking other jobs seemed like an inevitability regardless of what ASU officials thought would happen with the hiring of Edwards.

Sources have told FootballScoop that other Arizona State assistants have also fielded job offers this week. Additionally, we are told that strength coach Shawn Griswold has been informed he will not return.

Earlier this week, Arizona State lost defensive coordinator Phil Bennett for what was only described as “family reasons,” although the speculation is those family reasons may end up being accepting a higher-paying job to better provide for the family. Regardless of the outcome, Edwards is now in the position of having to find a new offensive and defensive coordinator for his first coaching job since 2008.

That whole “hire Herm, keep the staff” thing at Arizona State is off to a rollicking start https://t.co/vb4kBsrRx4

The jury will still be out on the Edwards hire at Arizona State, but many are willing to suggest this move has already failed to live up to whatever expectations Arizona State had in mind. The kicker is there was a much better alternative to hiring a new head coach if the main objective was to keep the staff together.

As noted by Dan Wolken of USA Today, elevating Napier to be the head coach would have likely resulted in a more stable transition with more staff consistency from one coach to the next. Instead, Arizona State athletics director Ray Anderson was convinced that going with more of an NFL Front office approach would be what helps get Arizona State to take the next step forward as a program. Bringing in a guy who has been in the NFL coaching game was sold as the most logical move to make to follow through on this policy.

If Arizona State had just hired Billy Napier to be the head coach rather than shoehorning him into Herm’s staff it would have made more sense and gotten almost no criticism.

There is no guarantee that naming Napier the head coach of the Sun Devils would have meant 100 percent stability on the coaching staff, because assistant coaches are on the move almost as frequently as head coaches, if not more often. But there is a good point here worth remembering, especially if we see more staff changes in Tempe before the start of the new season.

The problem is these coaches on the Arizona State staff have no allegiance to Edwards. Sure, Edwards may be a swell guy, and it is possible he would have gotten along just fine with his inherited staff if they stuck together. But when the school turns their back on a head coach they had been working with, the bridge is burned. They can’t all be like Virginia Tech’s Bud Foster, who was a key holdover from the Frank Beamer era to the Justin Fuente era.

And the timing of these changes is not ideal for Arizona State, perhaps moreso this year than any previous year. With an early signing period coming up next week (December 20-22), losing assistants at this point in time and having questions about what the staff will look like is a major concern for some programs. Assistant coaches can often be the key to keeping recruits on the board during a time of a head coaching change.

Losing both coordinators one week before the early signing period is about the least ideal situation that could have developed for the program if there was any hope of keeping any targets in line for the early signing period, especially when the new head coach has not coached a game since the kids were in second or third grade.

If Edwards is at Arizona State to be the CEO-like mindset for the program, then he needs to make some quick business decisions to fill out his staff with assets he can trust and rely on.