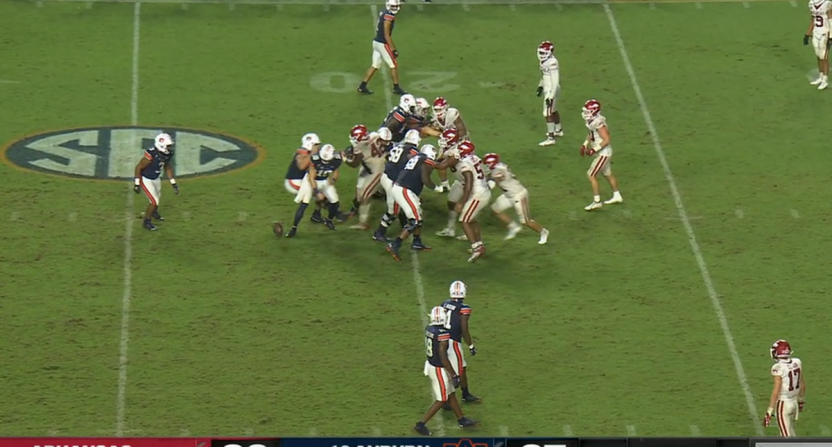 Trailing by one point late in the fourth quarter against Arkansas, Auburn missed a field goal that would have possibly secured the game.

After getting the ball back, they ended up making a field goal that definitely secured the game. But it’s what happened right before the second attempt that’s going to be remembered for a long time, especially by rightfully aggrieved Arkansas players, coaches, and fans.

Looking to spike the ball to bring the field goal unit on the field, Auburn’s Bo Nix fumbled the snap in the rain. He then spiked it anyway, which would ordinarily be intentional grounding. Except Nix spiked it backwards, which meant it should have been a live ball fumble.

Even if they had ruled the Auburn “spike” a backwards pass (they probably should have) there wasn’t an immediate recovery of the ball. I don’t think they could have given the ball to Arkansas on review. Refs everywhere are blowing their whistles long before it is recovered pic.twitter.com/N70kN2ix8f

You can see the referee running in to throw the intentional grounding flag, which is the correct ruling if a quarterback spikes it after fumbling the snap. In his haste there, though, he apparently missed that the ball was thrown backwards, and while Arkansas did recover the ball the play had already been blown dead.

This wasn't ruled a fumble for some reason pic.twitter.com/usK4OjhFut

That’s an absolutely brutal missed call. Again, once the refs didn’t realize it was going backwards, there’s not much that could be done to rectify the situation, as both officials in the backfield are immediately whistling the play dead. In the end, the replay review overturned the grounding penalty and it was ruled a fumble, but Auburn maintained possession and was able to convert the game-winning field goal.

Arkansas coach Sam Pittman aired his frustrations after the game:

Sam Pittman on Arkansas' postgame radio show: “They just said it was a fumble, a backward pass, but they blew the whistle before we recovered the ball so they couldn’t review it, I guess. That's the explanation I got.”

Just a horrible moment for the SEC and for Arkansas, specifically. This is the kind of rare, fluke moment that could have won them the game, and the officials just completely stepped in it by anticipating what was going to happen rather than watching what was actually unfolding.

It will be interesting to see how the polls treat the game, all things considered. But either way, Arkansas fans are likely not going to treat this game as a loss, and it’s hard to blame them.