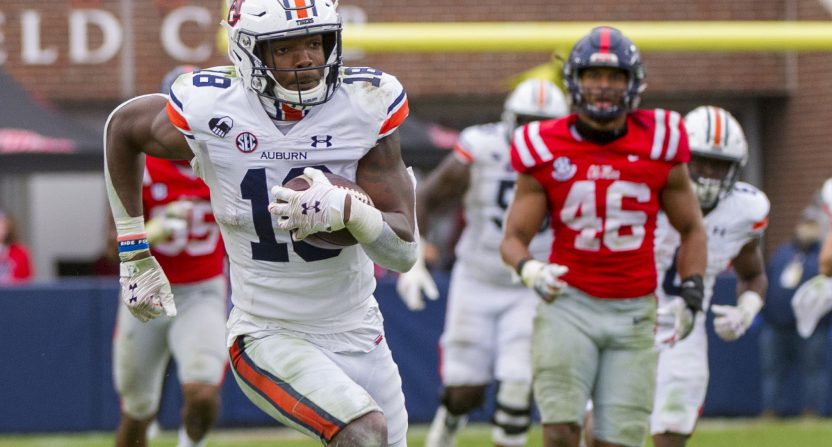 Auburn has had quite the season of controversy so far. Through five games, they’re 3-2, but all three games have featured some questionable officiating.

Most infamously, they essentially got away with a backwards spike/fumble against Arkansas, one of the more egregious missed calls in recent memory.

Today, against Ole Miss, they once again escaped with a late win, thanks at least in part to what looked like a missed muffed kick return.

After Ole Miss scored to take a 28-27 lead late in the fourth quarter, a bouncing kickoff appeared to glance off Auburn returner Shaun Shivers. Ole Miss then recovered it in the end zone, but the play was ruled a touchback rather than an Ole Miss recovery.

Slowed down on replay, though, and the ball does appear to have glanced off of Shivers, who instinctively chases it and then gives up. At the very least, the call could have been reviewed; there was ample evidence that it was worth looking at, especially given the situation. Auburn even took plenty of time at the line of scrimmage, too, and the broadcast crew was incredulous that it wasn’t reviewed.

Auburn ended up punting on that drive, but Ole Miss couldn’t score themselves or run out the clock. After giving it back to Auburn, the Tigers managed to do wriggle out of defeat once again thanks to a ridiculous touchdown pass from Bo Nix.

Bo Nix and Seth Williams connect for a 58-yard touchdown with 1:11 remaining! 35-28 Auburn lead — after the 2-point conversion — over Ole Miss. pic.twitter.com/n6dq17gMVa

Obviously there’s no guarantee that Auburn loses if the officials take a look at that return. There’s not even a guarantee the officials overturn it! But what a lucky season so far for the Tigers, and Ole Miss fans certainly have a right to feel aggrieved.

Though they should save some of that for Lane Kiffin, whose clock management on the final Ole Miss drive after the Auburn score left plenty to be desired. Running out of time with a timeout left is bad!

Anyway it was a wild game, especially for neutral observers, and certainly on brand for both schools.