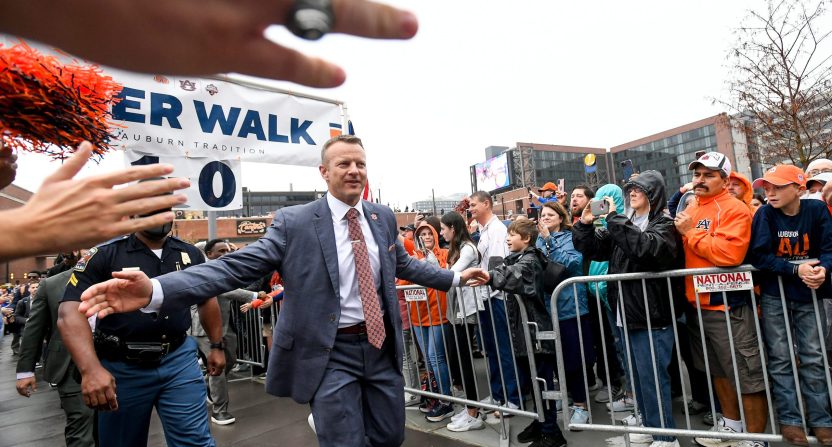 Auburn University hasn’t fired head football coach Bryan Harsin yet, but it sure seems like they’re trying to figure out how to do it.

Things went from zero to 100 over the weekend when reports and rumors surrounding Harsin popped up all over social media. While some concerns were salacious and unsubstantiated, others felt a bit more relevant, including the fact that 20 players and five assistant coaches left the program following the 6-7 season.

Things ran so wild on social media that both Harsin and the school both issued remarks. Harsin, who is on vacation, told reporters that “any attack on my character is bullsh**” and “none of that is who I am.” He also added that he knows he’s the right person for the job.

“I’m the Auburn coach, and that’s how I’m operating every day,” Harsin told ESPN. “I want this thing to work, and I’ve told our players and told everybody else there is no Plan B. I’m not planning on going anywhere. This was and is the job. That’s why I left the one I was in, to come here and make this place a championship program and leave it better than I found it.”

Meanwhile, instead of offering a. vote of confidence, Auburn President Jay Gogue seemed to imply that the school was in the midst of investigating Harsin and the accusations against him.

“I just want you to know we’re involved in trying to separate fact from fiction. We’ll keep you posted and make the appropriate decision at the right time,” Gogue said, per Tom Green of AL.com.

Monday, the school issues a new statement that did very little to quell the suspicions that they are looking for a way to cut ties with Harsin after one year.

“The Auburn administration is judiciously collecting information from a variety of perspectives, including our student-athletes, and moving swiftly to understand any issues in accordance with university policies and procedures,” read the statement. “Decisions regarding the future of Auburn and its athletics programs, as always, are made in the interests of our great university and in fairness to all concerned.

“We do not make institutional decisions based on social media posts or media headlines.”

Auburn did not mention Harsin or the football program at all in the statement, perhaps keeping things as extremely vague as possible. It certainly seems like the kind of prelude to a major move and each statement makes it harder to imagine a world in which Harsin remains with the school. That said, he’s got a pretty hefty buyout and the school is already paying its former coaching staff more than $28.5 million in buyouts.

Bryan Harsin’s buyout if fired without cause is $18.3 million, with 50% paid within 30 days. This after Auburn committed more than $21 million to buy out Gus Malzahn (and more for the staff) one year ago. https://t.co/DzapqQpDIQ

Auburn is in an actual Mexican standoff with its football coach

This statement should more accurately read:

"We're trying to dig up enough s**t on Harsin to fire him with cause, or convince him its in his best interests to take a reduced buyout. We'll report back to you soon."

There, fixed it for ya https://t.co/kBhLEzszLY

Translation: We have tremendous buyer’s remorse and are digging around to see if we can get out of this buyout. https://t.co/89UIH8TRBm

This ugly situation is sure to get even uglier once Auburn decides whatever it is they’re going to decide. Buckle up.