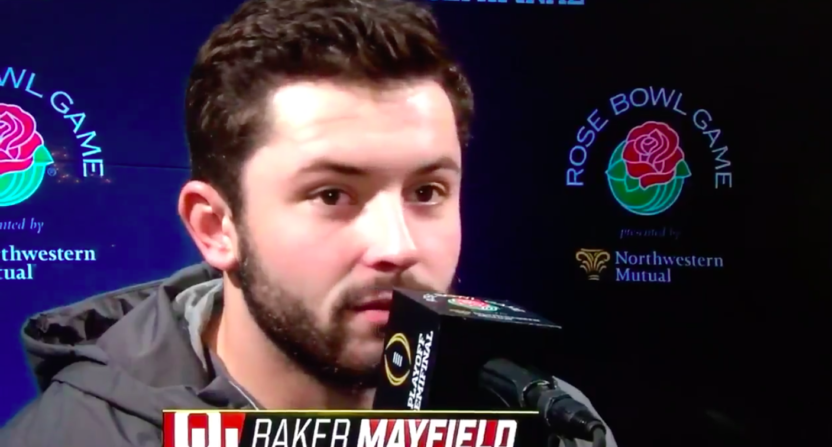 Oklahoma quarterback Baker Mayfield has never been one to avoid the spotlight. The 2017 Heisman Trophy winner made a name for himself on the field this season, but sometimes that involved incidents that took place before, during, and after the actual games. He made waves after OU defeated Ohio State and he planted the school flag at Ohio Stadium. When he felt disrespected by Kansas players, he made sure they knew about it in the form of a crotch grab. Point is, Mayfield doesn’t seem like the kind of guy afraid to speak his mind and put himself out there.

So when Mayfield no-showed a media availability session Friday morning as the Sooners prepare to face Georgia in the Rose Bowl on Monday, speculation ran wild. In fact, Mayfield had yet to participate in any non-football activities since arriving in Southern California, including a trip to Disneyland.

The team was saying he was sick, but was that merely some kind of ruse? Was Mayfield being childish and avoiding his responsibilities? Were the Oklahoma coaches trying to hide the fact that Baker would be unable to play? WHAT IS OKLAHOMA HIDING???

Despite the fact that Mayfield had been practicing this entire time, it was easy for people to take what they knew about him and extrapolate it, to the point where we got our first Anonymous NFL Executive visit of the year.

As we all well know, no one who has ever played for the Steelers, Packers, or Vikings has never gotten sick. That’s just a fact.

Anyway, Saturday morning rolled around and Oklahoma went ahead and announced that Mayfield would miss that media appearance as well. That didn’t stop journalists from asking his coaches and teammates about his whereabouts. Although they kept stonewalling reporters at every turn, there was apparently one person who had enough of all the questions. Baker Mayfield.

Oklahoma QB Baker Mayfield was a late, unexpected arrival at media day after it was announced he would not attend. https://t.co/GrJ7poU16a pic.twitter.com/xtIuNkV31g

Baker Mayfield sounds hoarse. He said he's sick and has been coughing and doesn't have a ton of energy. "I'm not dying but I'm not feeling 100 percent right now," he said.

Baker Mayfield decided to show up to Rose Bowl Media Day late after he flipped on the TV on Saturday morning and saw reports that he wouldn't be there. "That's when I realized this isn't about me. It's about Oklahoma. My teammates shouldn't have to answer questions on my behalf." pic.twitter.com/d399cdHR6v

Turns out, yeah, Baker is just really sick, but he’s sticking it out and fully expects to play on Monday. He just didn’t want to go to Disneyland or sit in a room full of reporters answering questions because he feels like crap. Fair enough. Some would say he’s required to be there no matter what, and perhaps that’s true, but it doesn’t look like there was much ill will meant by his absence.

Of course, regardless of the outcome of the Rose Boal, don’t expect this to be forgotten so easily. Anonymous NFL Scout and Anonymous NFL Executive are sure to remember that Mayfield got sick that one time and that could mean his stock draft should drop. People on TV shows will debate Mayfield’s immune system and “inner strength” to the point where you’ll have to form an opinion on the matter just because you have no choice. Then he’ll get picked by the Denver Broncos, probably, and then we’ll get a whole new round of arguments over whether or not Mayfield has the constitution to handle the mile-high climate.