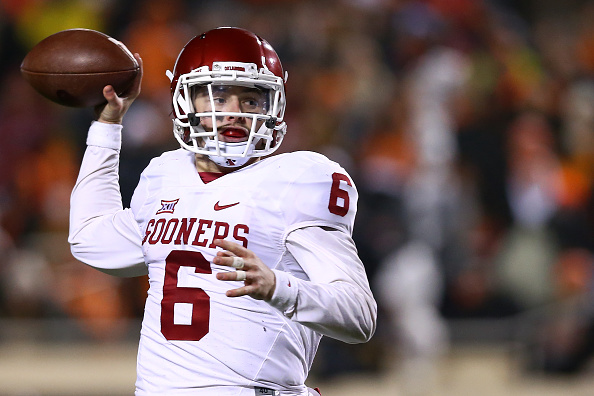 Baker Mayfield was one of the two best quarterbacks in college football this season and the signal-caller for one of the four teams alive for the national championship, but he’s still talking about a recruiting slight from three years ago.

The Oklahoma quarterback grew up in Texas dreaming of playing at TCU, but Horned Frogs coach Gary Patterson declined to offer him at the last minute. Mayfield ended up walking on at Texas Tech then transferring to Oklahoma, where he initially walked on before receiving a scholarship in October 2014.

At an Orange Bowl media session Monday, Mayfield was asked what team disappointed him the most that didn’t sign him to a scholarship.

“TCU,” he replied without hesitation. “They told me they were gonna offer me a scholarship and kind of drug it out, and I told other schools I wasn’t interested because I thought I was going to go there, and I truly believed they were going to offer me because they told me that. They disappointed me and kind of hung me out to dry right before signing day.”

Mayfield has clearly gotten the last laugh — he’s 2-0 against the Horned Frogs and star of the Big 12’s best team —  so you’d think he would have forgiven Patterson and TCU by this point, but apparently that’s not his style. A story on Mayfield in the December 21 issue of Sports Illustrated focused on the quarterback’s peculiar, almost Jordanesque refusal to forget any slights. Here’s the lede:

It is possible that you are on Baker Mayfield’s list. If you are a doubter or a hater; if you’ve muttered, yelled or tweeted something critical of Mayfield and the Oklahoma Sooners; if you are, God forbid, one of those who’ve stood in the way somewhere along Mayfield’s strange, sinuous journey, it is possible that you are on his list. Not that he would tell you if you were. He says he has never shown the list to anyone, or even told anyone of its existence until now. “It’s been my secret way of keeping the fire burning,” Mayfield says.

Naturally, that story includes plenty of shots at TCU.

Mayfield grew up a Sooners fan, but as a high schooler he dreamed of playing for TCU. “They were close to home, and they were really successful,” he says. After his junior-year success, he seemed set to join the Horned Frogs. Through his senior year TCU coaches invited him to satellite camps all over the state, where they had him throw to other top recruits. “They led me on,” Mayfield says. “They said they were going to give me a scholarship. Then a week before signing day they told me that they weren’t going to offer a quarterback in my class. Three days later they took a kid out in Temple [a rival high school of Lake Travis’s] who we just absolutely destroyed at 7-on-7, and I was pretty insulted. He was 6′ 3″. That helped me decide where I wanted to walk on. I wanted to go somewhere where I could play [against TCU].”

In a year or two Mayfield will enter the NFL Draft, and because of his relatively short stature he’ll likely slide a bit, which will give him the opportunity to do the whole “I’ll make everyone who passed on me pay” routine. Because hey, it’s working for him right now.

It’s worth noting that Mayfield has not played that well against TCU. He was 21-40 for 216 with one touchdown and three interceptions when the Red Raiders played the Horned Frogs in 2013 and 9-20 for 127 yards when the Sooners hosted TCU this year.

No. 4 Oklahoma plays No. 1 Clemson in the national semifinal at the Orange Bowl on Thursday.