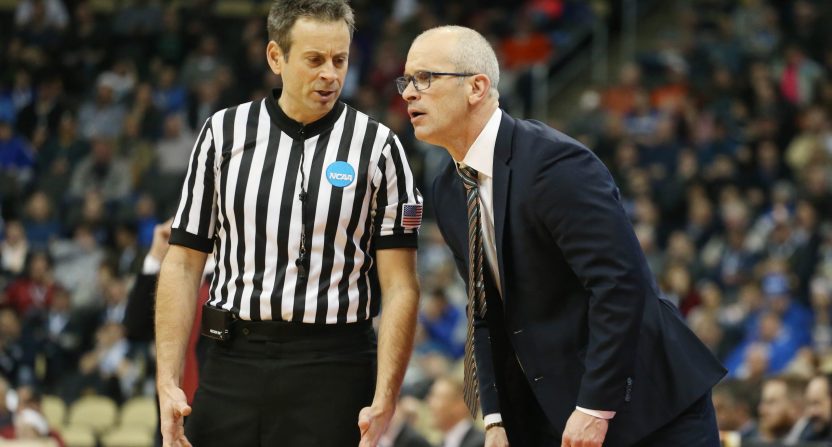 Connecticut Huskies coach Danny Hurley had an early exit from Tuesday’s game between his team and the No. 8 ranked Villanova Wildcats.

With the Huskies leading 24-23 in the first half, Hurley drew a technical foul. In response, he turned his back to the floor and faced the home crowd, raising his arms to try to get them going. That was more than the referee, James Breeding, was willing to put up with.

Danny Hurley just got a second tech leading to an ejection for this. College officiating needs a reality check. pic.twitter.com/6QOYSMHLDF

Apparently the refs just ran Danny Hurley for trying to rev up the crowd vs. Villanova. It's not just the coaches who are tired and fraying at the edges in late February.

This is a head-scratcher.

With ejections — even bad-looking ones — we normally have to point out that we don’t know everything that was said. That didn’t seem to be the case here, though. Hurley had his back turned to the officials. And while he might have said something, the referees weren’t close to him.

Wow. Danny Hurley just got a second tech and ejected for waving his arms to get the crowd to cheer after his first tech. Showing up the refs? Sure. But they also have to walk away there. If you get offended by a home crowd getting rowdy, you can't ref in the Big East.

To be fair, Hurley drew some criticism from fans watching the game.

Ahhhh Danny Hurley making it about himself? Color me shocked!

I’m sorry there’s no defending Danny Hurley. He is a disgrace to the profession and it’s a joke that he’s coaching a program as prestigious as UConn. If he didn’t deserve the tech there, he did at 27 other points of every game

Danny Hurley wasn’t smart to rev up crowd flailing his arms after he got T’d up, and got ejected thereafter. UConn needs this win on their resume for the NCAA tournament and to not get swept by Nova. Hurley put himself over his team.

By and large, though, the reaction to this ejection was negative. If people were not outwardly in favor of Hurley, they were opposed to the ejection.

These refs are a disgrace. What a debacle. Ejecting him? Pathetic.

How can you eject Danny Hurley from the game for hyping up the crowd? That is one of the worst calls I’ve ever seen

That's a horrible 2nd technical on Danny Hurley. Raising his arms up and down to get the crowd fired up, not looking at the refs or anything.

Danny Hurley didn’t deserve to be booted like that.

College officials are an absolute joke. What just happened to Danny Hurley is everything that is wrong with the sport in a nutshell

I wonder what Danny Hurley did for the second technical. If it was the riling up the crowd thing, that’s not a technical.

We’re really going to toss Danny Hurley from this game for firing up the crowd?! Got the first one but what an absolute joke.

I know people will disagree, but God do I love Danny Hurley. Give me that kind of fire from my coach any day of the week over the vanilla approach taken by others.

I've only seen a Danny Hurley-style ejection once in a JUCO game.

James Breeding needs to go, Mark. He’s out of control.

And I can’t stand Danny Hurley or UConn.

That is one of the worst calls I have ever seen in my life.

A miscarriage of justice in Hartford.

It will be interesting to hear what Breeding has to say to defend this. He may say something to change the mind of most of the people who watched it. Though, at this point, it’s hard to imagine what that would be.

Right now, this looks like nothing more than the referees trying to make themselves the main attraction. That’s never any good. In a game between two ranked teams this late in the season, it’s even worse.